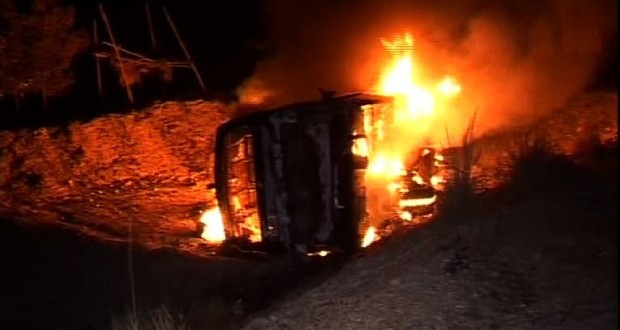 QUETTA: At least three persons have been reported killed and more than two dozens injured in a suicide attack near a pilgrims’ bus in Akhtarabad area of Quetta on Wednesday evening .

According to the Police a suicide bomber rammed his explosive-laden vehicle into the bus carrying Shia pilgrims in Akhtarabad area of Quetta.

“A pilgrim’s bus, carrying 50 passengers, caught fire after a powerful blast near Akhtarabad By-pass in Quetta this evening, leaving dozens of passengers injured on the spot.”  Confirmed sources

Three passengers succumbed to injuries while many more injured are in very serious condition; a large number of women and children are also included in the blast victims, added the rescue sources.

The rescue teams and police contingents rushed to the blast side and started moving the injured to Bolan Medical Complex, after cordoning off the area. The local administration have imposed emergency in all key hospitals of the city.

After blast, some unidentified culprits opened aerial fire at the scene and created harassment in the area while the bus, returning to Quetta from Iran, burnt completely to ashes, told sources.

The Majlis-e-Wahdatul Muslimeen (MWM) have also condemned the attack and lashed out at the government for being unable to stop terrorist attacks in the country.

The MWM have also announced three days of mourning

2014-01-01
admin
Previous: The Baloch Families on March for Their Relatives
Next: All Parties Action Committee calls for shutter down in Kalat against no Sui Gas supply