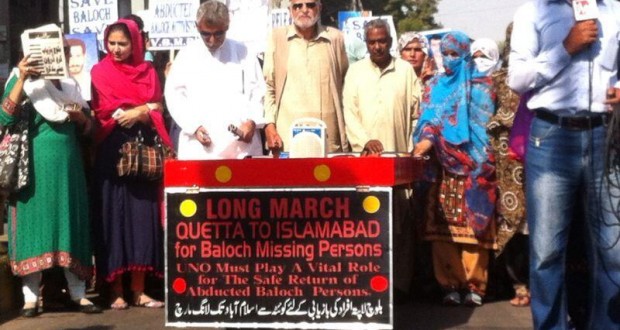 The Baloch Families on March for Their Relatives

The Baloch families’ long march, led by Mama Qadir Baloch (70 year old man and the vice president of an long march in sindhadvocacy group named Vice for Baloch Missing Persons), commenced from the Quetta Press Club on October 27, 2013.  After travelling 27 days and covering 780 kilometers on foot, the Baloch long march participants, including Farzana Majid, the former BSO-Azad leader/who is presently missing, Zakir Majid’s sister, reached with dozens of women and children with bruised feet and ailing health the Karachi Press Club on November 23, 2013.

While in Karachi, the Baloch families spent 20 days at a protest camp outside the press club where they were paid visits by the leaders of political parties, ministers and social activists. They also showed solidarity with the Baloch missing persons’ families, and chanted slogans against the government to endeavor to release the missing persons of Balochistan.

After having been pressed by the former Chief Justice of Pakistan, Iftikhar Muhammad Chaudhry, the Defense Minister Khawaja Muhammad Asif paid a visit to the Baloch missing families’ camp.  He ensured the Baloch families that he would release their relatives if they removed the camp. But the Baloch families/protesters flatly refused him, and they told him they were dodged many times by the leaders.

For instance, Dr. Malik Baloch, the Balochistan’s first middle-class Chief Minister, when visited the Vice for Baloch Missing Persons’ camp in Quetta also ensured the Baloch families to remove the camp, so that he may have released their relatives.  But, so far, he has failed to recover a single Baloch missing in Balochistan. Contrarily, he later on said during a press conference at the Karachi Press Club: “Releasing the Baloch missing persons from the captivity of the state actors is beyond my control.”

When the former Chief Justice of Pakistan Iftikhar Muhammad Chaudhry ordered the Defense Ministry to produce the missing in court; he identified the 35 people but none of them was from Balochistan. They belonged to Khyber Pakhtunkhwa province of the country, and they were picked up during the military operation against the Taliban outfits.

Malik Siraj Akbar, the editor-in-chief of The Baloch Hal, said: “Former Justice Chaudhry had been pressing the military authorities hard to produce the disappeared people. He even issued a contempt notice to the Inspector General of the Frontier Corps (F.C) for not appearing before the court despite repeated orders from the judiciary. And they bought more time until the Chief Justice retired from his office.”

However, the Supreme Court of Pakistan has so far completed 95 hearings on Balochistan but fails to provide justice to the Baloch missing persons’ families. Also, despite holding the IG FC and the top military authorities in the Baloch missing persons’ cases, it did not bring any results. It signifies, there is lack of coordination between the institutions of the state. And when the state institutions do not work in coherence with each other, then it brings them in a state of conflict with each other. Each institution works in complete isolation without following a national agenda and thus results in chaos and anarchy in the whole structure of governance and state’s system. Unfortunately the same situation Pakistan has been facing as a hurdle, particularly in the Baloch missing persons’ case.

Coming to the mainstream national media, this performs the role of opinion maker and educates the masses on all issues. But, unfortunately, this time, regarding the issue of the Baloch missing persons and long march, they have not been giving coverage to the long marchers. Though the almost all TV channels’ head offices are situated in Karachi, where Mama Qadir Baloch along with other missing Balochs’ families stayed more than two weeks at their camp outside the Karachi Press Club, none of them went to them and discuss their grieves.  So, really, it raises the question: how much the Private TV Channels are independent in the country?

Mama Qadir Baloch, while addressing a press conference in Quetta, said on the occasion of commencing the first phase of the long march: “If the state authorities seemed least bothered about our key issue despite the completion of our first phase of the long march. We will resume our long from Karachi to Islamabad to keep protesting until or unless the last missing Baloch is recovered.” Similarly, when the leaders failed to convince the Baloch families to release their relatives, then Mama Qadir Baloch along with other Baloch families resumed their long march on December 13, 2013—a distance of 1468, which the Baloch families have to cover.

When contacted, Mama Qadir Baloch said: “In Sindh, the people belonging to different walks of life have been welcoming us after resuming the second phase of the long march.”

“At international level, we are being satisfactorily responded by the media and Human Rights Organizations,” he added.

Moreover, it is to be noted that the responsible authorities are not taking up the issue of the Baloch missing persons, because, despite the Baloch families’ ongoing long and excruciating journey for their relatives, two more missing Balochs’ dead bodies are found from the Lasbella and Pishin districts of Balochistan. After the responsible authorities’ frequent hoodwinking, the international organizations should intervene into this key issue for the purpose of remedying the Baloch missing persons’ families’ grieves.( Courtesy: Bolan Voice)

The writer can be contacted at akbarnotezai@yahoo.com

Republished in The Balochistan Point on January 1, 2014 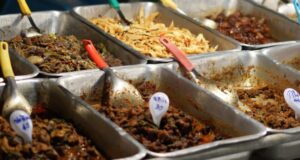