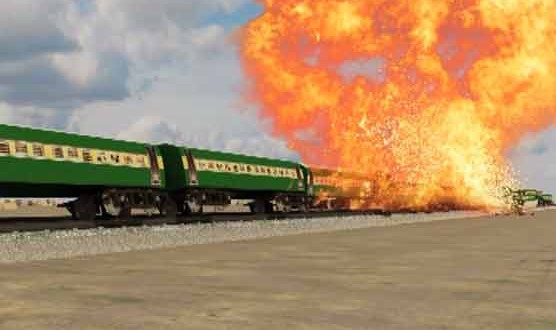 SIBBI: At least 15 people were killed and 35 injured in a powerful explosion in one of the bogies of Jaffar Express near Sibbi Railway Station Tuesday.

The explosion occurred in one of the bogies when it was at Sibbi Railway Station. The explosion affected three bogies of the train.

Federal Minister for Railways Khwaja Saad Rafique confirmed the death toll to 15 and said over 30 injured in the incident. He said investigation into the foul play had been started. He said around 80 people were aboard the bogie where the bomb was planted.

GM Railways operation said the Jaffar Express was heading to Lahore from Quetta when a blast hit the train at the Sibi Railway Station during its stopover.

The wounded  persons were shifted to nearby hospitals.

Published in the Balochistan Point on April 8, 2014