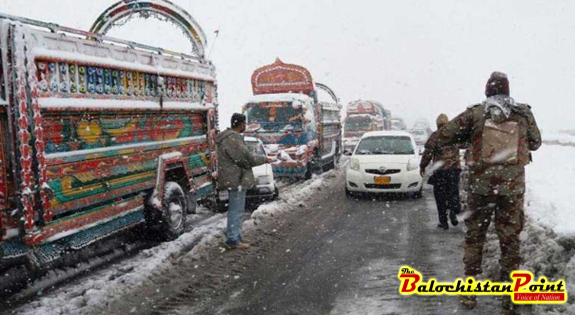 Travelers are facing great difficulties due to blockade roads

Quetta: Travelers are facing great difficulties due to blockade of Quetta-Karachi, Quetta-Zhob and other areas traffic. National highway remained blocked between Muslim Bagh and Kan Mehterzai and normal traffic could not be restored on fourth day and passengers are stranded.

Hundreds of vehicles are stranded on both sides. Instead of helping passengers administration asked them why they travel during snowfall.

At the same time there was low pressure in major parts of Metropolis.

Supply was disconnected in Pahstoonabad,  Sariab road, Brewery road, Samungli road and other areas for hours together.

Residents along Western by Pass blocked the road against load shedding of gas and electricity and shouted slogans against administration.

People demanded action against administration for not restoring traffic along Quetta-Zhob section for four days.

Minimum temperature recorded Tuesday was minus 4.1 Celsius and maximum 7.5 Celsius.