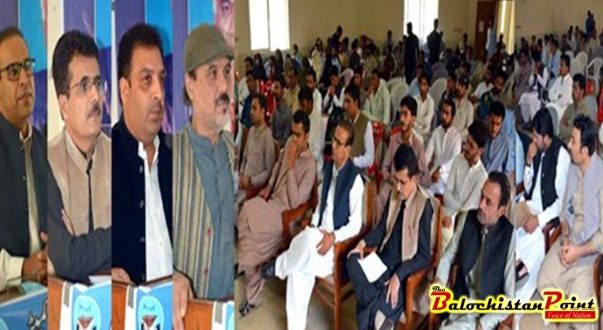 In the fields of education and journalism, two reverent personalities Dr Rasool Bukhsh Raisani and journalist Lala Siqque Baloch played great role respectively. In honor of both, Baloch Student Action Committee held a reference at University of Balochistan to highlight the exceptional contributions they played in their respective fields.

Journalism and education both can be considered the fields which have not yet unluckily advanced at a level on which people from Balochistan should feel satisfied. The continuity of involvements in the particular field are still severely required to be acclaimed and adjudicated for a change which the society we live necessitates to have preferably.

The speakers paid legendry tributes while addressing the audiences and said Balochistan gave birth to the iconic persons who played their outstanding roles in various fields. The iconic personalities, Dr Rasool Bukhsh Raisani and Lala Siddique Baloch come among those persons who Baloch will never forget due to their advantageous contributions. Both of the persons opened their eyes in such backward and deprived areas namely Wadh and Lyari, where education and journalism both have been considered with least enthusiasm and considerations but the places and names that amazingly attributed to the late personalities in whose tribute the remembrance reference is held transparently indicate there born many such people with creative potentials who the society didn’t tolerate to have.

Both have seen the worst challenges via ways of becoming educationist and journalist but their sentiments could never get desiccated and one gone through the hardships to have the degree of PhD in Education and other to be a well-known writer whose attempts highlighted the significance of education and extended ethics of journalism that today the progenies gladly attempt to follow.

The addresses of the reference revolve around the life circle and contributions of both reverent personalities. At the concluding session, BSAC has felt pleased to announce an annual award on behalf of Dr,Rasool Bukhsh Raisani’s educational contributions to be attributed to a person who will keenly and enthusiastically attempt to play the utmost role in progressing the educational proceedings in institutes from Balochistan.

The 2018 excellence award of Dr.Rasool Bukhsh Raisani has been awarded to a lecturer of post graduate college Quetta, Barkat Ismail Baloch. He was among the persons who primarily adopted the American Language system to be thought in Makuran, which has greatly attracted the students towards education that increasingly elevated the literacy rate.

Published in The Balochistan Point on April 9, 2018