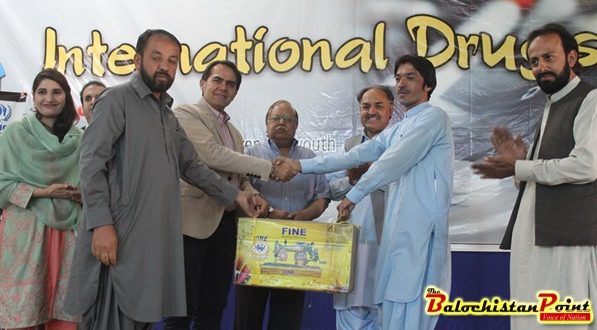 UNHCR helps people to get rid of drug addiction

QUETTA: Rahmatullah, a 26-year-old Afghan refugee was a bright student and wanted to become an engineer. He would score top marks. His life took a turn for the worst and he ended up addicted to heroin.

“The first puff of a cigarette inhaling heroin deep inside and I was on top of the world. It was an amazing feeling, no worries and anxieties – only blissfulness,” Rahmatullah recalls. “I thought it was a brain enhancing drug which will enable me to achieve my dreams quicker. But I was wrong and I ended up suffering from a fuzzy mind.”

The heroin-dependent Rahmatullah has recovered now after being admitted to the Nai Roshni centre supported by UNHCR. The UN refugee agency has been providing financial and technical support to the centre since 2008. The centre provided him counselling – encouraging him to be strong and try to get back to his life before drugs.

Around 100 Afghan refugees are detoxified through proper medical care and regular psychosocial counselling each year. The centre also conducts free HIV tests of the patients and refer the HIV positive cases to the Balochistan Aids control programme for treatment.

Born in Surkhab refugee village, he was in grade six, when he became heroin-dependent. He started missing his classes. His family tried to support him but this did not work. His parents fixed his marriage with the hope that he will fight his addiction.

The Nai Roshni centre helped him get rid of his drug addiction, but stole 13 years of his life and dreams. “When I was a drug addict, my family would take care of my five daughters as I could hardly make ends meet. This would instil a sense of guilt in me,” he recalled adding he wanted to get back his dignity.

He urges people especially young people to learn from his life as he suffered a lot. “I was a bright student. I managed to study until 11th grade. I would have been an engineer by now if I had not fallen into this trap,” he said.

Rahmatullah is now learning tailoring and embroidery at the centre for the past one and half years. “I feel normal now and I am trying to make enough money to provide my family” he said.

He couldn’t get enough education, but he is now determined to provide higher education to his girls and he will allow them to choose the occupation of their choice. He calls on all young people to concentrate on their education and not to trap by drugs and all the problems associated with addiction.

Published in The Balochistan Point on April 9, 2018