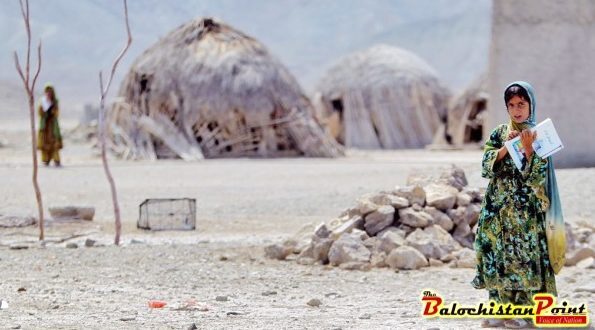 Nohan Baloch, 12, gets up early in the morning and goes house to house in finding the work to earn a sum of money for the family. They are the family of four members. Since his birth he has never worn new clothes and shoes when he sees other children in wearing beautiful shoes and clothes in heading school, he laments to God, “Oh lord, I want some money to enroll myself in a school. Will I get such drop-dead clothes and shoes to wear and sit in a classroom with other school-going children? Hope He listens. My prayers are accepted someday”. The tears of his eyes reveal everything about the condition of his family.

Similarly, many aged mothers are in the long wait to get their jobless children in good positions. Many old fathers are waiting to have obliging facilities in the regions of the so-called leaders. Many siblings have yearnings to see their long-lost brothers.

Do you know the so-called leaders of Mand? Your promises have never eased the troubles of the residents. Still there are many families who sometimes sleep without taking a loaf of bread by dint of depravity. There are many families who are passing a very miserable life for a long time. They know there comes no obliging leaders to help them out in the time of difficulties and troubles; therefore, no poor in the region dreams in dwelling a comfortable life.

Do you know the representatives of Kolahoo? You have always served your own interests rather than public issues. They need roads to travel not only promises. They need schools and colleges not drug-centers. They need their constitutional rights not your money and cars.

Confronting the boy [Nohan baloch] and listening to his rebukes I come to know that major failure in the great development in our beautiful land is, massive corruption, insufficient allocation of funds, untrained human resources, implementation of apt laws, lack of visions, and poor monitoring system which is why the current allocation of funds provide no productive results.

In my resent visit to Tump [Tump is the Tehsil of District Kech with the population of almost 146,286 and befalling Pak-Iran border], I had the cloud of confusions well-nigh the drive on the bumpy roads which made us too exhausted. “Don’t you people complain to the DC or other concerned authorities about the beat-up condition of Zobida Jalal Road?” questioned Yahya Badal in a shocking mood. He had his visit to Kolahoo, Nazirabad, Balicha, Tump and other nearby villages of the tehsil after the announcement of vocations amid second wave of coronavirus.

In smiling I replied, “The leaders are well aware, but they still long to do much corruption ahead. Their families are well settled in good cities who we are that they care us.” We continued rebuking all, but nothing happened. The roads are still in the same conditions, the schools are still with no facilities. The hospitals are still with no doctor and medicines.

Recently, on the instructions of Madam Zobida Jalal, Federal Minister for Defence production HODs of District and Divisional departments headed by Commissioner Kech had paid a visit to Tump and Mand in the middle of December 2020. Zobida Jalal announced some funds for the reconstruction of the roads and development of her own town Mand. Hope her promises are fulfilled. It is not the kind of her to allocate funds for the development of the region rather it is her duty-cum-right to serve the interest of the public.

Recently Balochistan Point caught up with Droshum Baloch [she is a student who belongs to Mand town] and inquired her how does she see Zobida Jalal as a promoter of females’ education in Mand?

“Well Zobida Jalal was the first female in Mand to acquire education and invited other females to get education as it was a tough task for a female to gain education in the region. Before her, females were not allowed to be at schools in getting education, but after the long struggle of Zobida Jalal now many females are inspired in the field of education. Many citizens have rebuked her family members in sending a female child into school, but her father listened to none.”

Further Baloch added, “To me, she played an indispensable role in the promotion of female education commonly. She has not only promoted education but also motivated females spiritually to move ahead in the field of education.”

Consequently, the leaders of Tump have hardly ever worked for the interests of public as a whole. Meeting with Nazish [a resident of the ignored village Kolahoo], I inquired her, who does she blame for ignoring every development in the region?

“Frankly speaking, I always blame the public as whole.” Before I put a question, she says, “We have no leaders to represent our existing dilemmas and solving out the problems is an outer-cry.”

Sajjad Nezar, [Sajjad Nezar is a studious student belonging to Koonshkalat village] said, “Our leaders have never given attentions to the public as a whole Koonshkalat in particular, Tump Tehsil in general.” When I inquired him how he sees the promotion and development of the aforementioned village by the so-called leaders?

Nezar added, “I have personally seen no splendid leaders in my region. There is no good leaders; all political workers serve their personal interests. They are not supportive to the people at all.”

He, too, complains about the broken link-roads of Koonshkalat. “Almost since 2010, the roads are in shabby conditions: we witness no change in them. Yet no leader heads his/her attention towards the deep-rooted issue because they are well settled in other cities like Karachi, Islamabad, Quetta, and so on and so forth.”

According to him, the canals of the regions are no more workable. There are many poverty-stricken families who have earn a small sum of money in working in the agriculture sector. But by now they have no good professions to have their livelihoods.

“There are only two primary schools for girls in Koonshkalat leaving out high schools and college. I have only seen 3 girls leaving out for higher education from my village Koonshkalat. Seeing them in university, I feel blessed to know that they would be educated members of my society someday.” Nezar added.

In reality, many girls pass their primary level and sit at home or travel to Tump for getting middle education. Although most of the parents are paupers as they are unable to afford the expenditures and transportation is another dilemma.

Considerably, joblessness and the so-called government are the main drives behind the destructions of youths. Many youths are drug addicts and out-of-school because of non-implementation of   laws.

Albeit, the roads are in abysmal conditions and no leader ever visits to the nearby villages of Tump until and unless the sessions of votes is near. They keep promising to address the existing dilemmas when the time of vote approaches, but they forget every promise when they are selected or elected as our representatives.

About author: Munaj Gul is a regular contributor to B-Point & pursuing LLB at University of Turbat. He can be reached at munaj1gul@gmail.com

Note: The names were changed due to privacy concern.

Published in The Balochistan Point on December 20, 2020