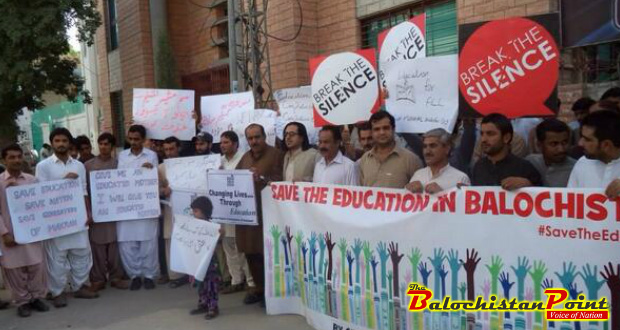 Turbat – Parents of students have protested against hike in private school fees in Turbat city.

Parents are upset as private school owners have raised the schools fees suddenly without any prior notice, learnt the Balochistan Point.

Parents say that unchecked increase in fees of private schools is not a good trend and must be condemned.

Offering an explanation for increase in fees, a parent said, “Private schools are taking advantages of our compulsion as we don’t have any other option to provide decent education to our children.”

He warned, “Private school owners are mistaken and we will vehemently protest against these schools if fee hike is not withdrawn.”

Students have also criticized the decision of school owners to increase fees. “Private schools have not brought any improvements nor have they recruited any new teachers, so why they want to increase the fee?” questioned a student while talking to Balochistan Point.

General Secretary of Private School Teachers Association (PSTA) Kech, also condemned the decision of hike in school fees. “We support the stance of parents and term the fee hike as totally unjustified.”

Parents and PSTA-Kech have urged the government, department of education and other responsible authorities to take notice against the arbitrary increase in fees of private schools.

It must be noted that parents of students have protested against fee increase in private schools in Karachi, Lahore and Islamabad as well.

Government of Balochistan is contemplating the idea of establishing a Private Education regulatory authority.

Published in The Balochistan Point on September 22, 2015

Education Turbat 2015-09-22
Editor
Previous: Letter: Need for Makran Board
Next: Letter: No Emergency Doctors in Turbat