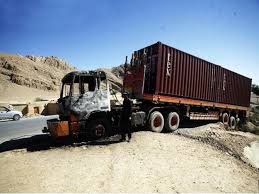 MASTUNG:  At least two people received bullet wounds in an attack on NATO containers in the Dasht area of Balochistan on Thursday. Levies sources said that unidentified armed motorcyclists opened indiscriminate fire on two containers passing through the area, injuring the drivers and setting ablaze the trucks. The attackers managed to escape from the scene. A rescue team rushed to the site and shifted the injured men – identified as Asmatullah and Shah Pasand – to Civil Hospital. Levies personnel cordoned off the area and launched a search operation to trace the attackers.
staff report