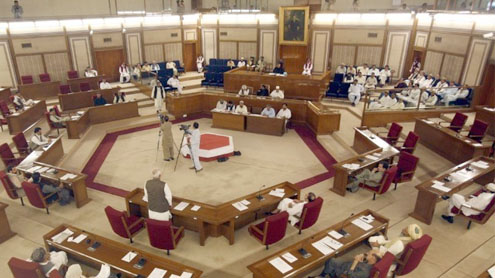 QUETTA: The Balochistan Assembly unanimously approved the provincial budget for fiscal year 2013-14 here on Thursday. The session was chaired by speaker Balochistan Assembly, Mir Jan Mohammad Jamali. Balochistan Chief Minister Dr Abdul Malik Baloch had tabled deficit budget for 2013-14 on June 20. Dr Baloch moved a total of 51 demands for grants, including 42 pertaining to non-development expenditures and nine to annual development programme. The total amount of 42 demands for grants pertaining to non-development expenditures was Rs 117.348 billion and amount of nine other relating to development schemes was Rs 43.91 billion. No cut motions were presented by any member of the assembly. It merits mentioning here that with an increase in allocation from 4.22 percent to 23.13 percent, Rs 34.89 billion have been earmarked for education compared to 13 billion in the previous budget. An amount of Rs 16.23 billion has been allocated for the maintenance of law and order. A sum of Rs 15.23 billion has been allocated for health, Rs 7.87 billion for agriculture, Rs 8.17 billion for communication and works and Rs 8.18 billion for the energy sector. At least Rs 1.48 billion have been allocated for fisheries, Rs 2.67 billion for livestock, Rs 160 billion for natural resources and Rs 4.66 billion for irrigation. It was the first annual budget presented by Dr Malik Baloch led coalition government of Pakistan Muslim League-N, Pashtunkhawa Milli Awami Party and National Party. staff report/app