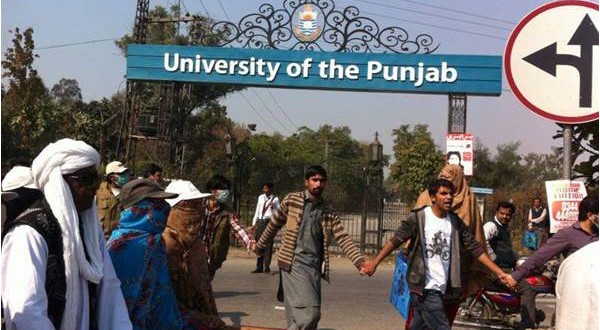 Pushing a four-wheeled cart on the main Canal road along with two men and a dozen or so women, Mama Qadeer, surrounded by young students from Lahore marched on after months of having followed a similar routine all over Pakistan. The marchers, with pictures of missing family members placed like dead corpses on the push cart, marched beside him like they were part of a funeral procession. I quietly fell in line with them to become a part of the chain made up mainly of young students from the city’s different universities. These students encircled the main body of the marchers – the original 21 who had started from Quetta to Karachi and had reached Lahore after some 110 days – and accompanied them to the Mall where they were to stop for a while and address a gathering organized in their honor.

Walking even for a few kilometers with these bereaved family members whose loved ones have been abducted now for years without any trace was a painful experience making one wonder at the courage and determination of these people who have walked daily for 20 and more kilometers on foot without taking a break for a single day.

The enforced disappearance of political workers has been a part of Balochistan’s political history. It was in the 1970s that the problem first started. “Things got worse in 2001 when General Pervez Musharraf came to power,” says Mama Qadeer Baloch, the man who is leading the march and is the Vice Chairman of the Voice for Baloch Missing Persons (VBMP). Till now thousands of Baloch political activists, students, lawyers, doctors, ordinary farmers and peasants have gone ‘missing’, a euphemism used for their forceful abduction. Most of them are said to have been picked from their homes or busy markets in broad daylight by personnel in uniform or plainclothes allegedly belonging to the security agencies in the province. Once picked up, their whereabouts remain unknown for long periods of time, sometimes forever. Occasionally two or three mutilated corpses turn up, thrown on the roads or mountain sides, a phenomenon dubbed by Baloch nationalists as the “kill and dump policy”.

The discovery of a mass grave in the Totak area of Khuzdar district last month has piled further evidence on top of these stories. According to the Pakistani media 13 mutilated bodies were recovered from this mass grave, a claim contradicted by local activists who insist the number to be over 100. After deliberating for days a minister from the coalition government in Balochistan conceded that the graves are indeed of missing persons. When asked who was responsible, “The state within the state” was his reply, terming the act as a “genocide of the Baloch people”.

Many of the stories of these ‘missing persons’ are unknown but two of them have found widespread attention. The son of a bank manager, a sober and thoughtful looking Jalil Reki was a political activist and worked as information secretary for the Baloch Republican party. On Feb 13 2009, he was picked up by two pick-up trucks and two unregistered cars. For the next 33 months his whereabouts became unknown. At last one day someone saw a ticker on the Balochi langauge TV channel Vush about Jalil’s dead body having been found near Turbat. He informed Mama Qadeer, Jalil’s father, who received confirmation of his son’s death from the television. Later on Mama refused the assistant commissioner’s offer to transport his son’s body home, saying “Your job was to take him away. Your job was to kill him. You have done your job. I can do the rest myself.”

While Mama Qadeer addressed journalists at the Diyal Singh Mansion on Lahore’s Mall Road, his seven years-old grandson sat beside him. When his father was taken away the child was only four. Mama Qadeer had lied to him many times about the absence of his father but the day his mutilated and badly burnt body arrived for burial, he took him by hand and showed to him what was left of his father. Such incidents could give birth to a vicious cycle of violence and revenge, unless justice is delivered in a fair and transparent manner.

The other case which got the attention of media and human rights organizations is that of Zakir Majeed Baloch, whose sister’s continuous campaign for his release has helped highlight the case. Zakir was a student of English at the Lasbela University of Agriculture, Water and Marine Sciences and a member of the Baloch Student Organiation (Azad). On 8th June 2009, he made his way from Parangabad Market to his friend’s home where two of his friends became eye witnesseses to his abduction. The Asian Human Rights Commission has also documented the case and is part of its report in which the eye witness says:

“His alleged abductors drove up in two cars without number plates and asked the young man a few questions after which they took Majeed away. One car was a Toyota Vego, the other a Toyota Surf SSR.”

Abducted that day, Zakir Majeed is still ‘missing’. His family received messages from him for two years but then all communication stopped. Farzana Majeed has been going from pillar to post since then in order to find her missing brother. From filing writ petitions and organizing protest camps, she along with other family members of missing persons have tried everything at their disposal.

Having lost all hope of official redressal, the relatives of these missing persons decided to do what they had been thinking about for a long time: A Long March from Quetta to Karachi. Lahore and Islamabad were also added afterwards to try and give their plight maximum projection.

Mama Qadeer, Farzana Majeed and Ali Haider, the son of a doctor, Mohammad Ramzan Baloch, also a missing person for a couple of years, started on 27th October last year and after passing through deserts and villages across Balochistan reached Karachi on the 23rd of November. “During the march, the caravan was attacked thrice and a suspicious car tried to hit and kill me, but I jumped to the side of the road and survived,” Mama said, adding that families of the participants have been threatened while personnel of law enforcement agencies raided the house of Voice for Baloch Missing Persons’ Vice Chairperson Nasarullah Baloch.

They camped in Karachi for a few days, protested, got assurances from courts and politicians alike but again with zero result. The next destination was the seat of power in this country, Lahore, which they reached after walking for around 80 days. While passing through the Punjab University, famous for its political culture and rallies every other day, they said it was like passing through a graveyard. Not a single student from the university came out to greet them. The case was no different as far as the general public was concerned. Only a string of students, mainly Baloch, from Forman Christian College, Government College and activists from leftist parties joined them as they passed through the city.

In Lahore Farzana Majeed told reporters at the Punjab Union of Journalists’ office “I had heard that Lahore is a big city with a population of millions but I see very few people here,” giving voice to a lost opportunity for the people of Lahore to lessen the Baloch’s bitter sentiments towards Punjab.

The march has now left for Islamabad where it intends to present its demands to different human rights organizations and to the United Nations.

Last reports received say that the marchers have received phone calls telling them their efforts to get into Pindi will be thwarted. The patrol around them has suddenly increased dramatically and for the first time a contingent of lady police is now also present (such a contingent of lady policewomen is only brought when women have to be arrested or controlled). The presence of this lady contingent has caused great anxiety amongst the marchers as it seems that there may be an attempt to thwart the march with force. These are unarmed civilians in a peaceful march for the rule of law, hence it is vital that the march is not only protected but that it is allowed to exercise its democratic right of reaching its destination and presenting its demands to the United Nations.

It is important that the government and judiciary help the marchers recover their trust in the state for up till now these protesters have only been speaking the language of fair trials and courts. Pakistan cannot afford to further radicalize another chunk of its population. (Courtesy : http://www.thefridaytimes.com)

Republished in The Balochistan Point on February 21, 2014