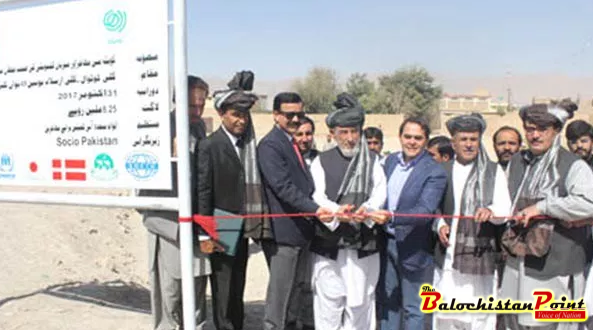 QUETTA: The United Nations High Commissioner for Refugees (UNHCR) in collaboration with its implementing partner Society of Collective Interest Orientation (SOCIO-PAKISTAN) and Government of Balochistan completed the 10 months project of “Improving Health & Hygiene Status of Refugees & Host Communities in Quetta”.

The key objective of the project is to bring long term improvement to the general health of local population. The project reduced mortality and morbidity rates associated with water borne and vector diseases. The total intended beneficiaries are 120,000 which comprises 72000 from hosting and 38000 from the refugee communities.

The project Completion Ceremony was held in government boy’s school of the city and Mr. Kaleem Ullah Kakar, Mayor of Quetta city was the chief guest.

Under the project – implemented through the Refugee Affected and Hosting Areas (RAHA) platform, UNHCR initiated this project on 1st January 2017. It was aimed to improve the health and hygiene status of population residing along the passage of sewerage water in Killi Kotwal, Killi Arsalan and surrounding-union council.

Speaking at the occasion, UNHCR Head of Sub-Office Quetta Marin Din Kajdomcaj appreciated the generosity of the government and people of Pakistan for hosting millions of refugees for nearly four decades. UNHCR understands the challenges of host communities and RAHA is to help the host population to bring some betterment in their lives. He thanked the people of Denmark and Japan for their generosity by providing funds for this programme.

The project “Improving Health & Hygiene Status of Refugees & Host Communities in Quetta” reduced mortality and morbidity rates associated with waterborne and vector diseases e.g. diarrhoea, cholera and malaria by increasing awareness of women and girls on better health and hygiene practices. It also increased livelihood opportunities through an integrated community approach that enhanced peaceful co-existence between refugee and hosting communities he added.