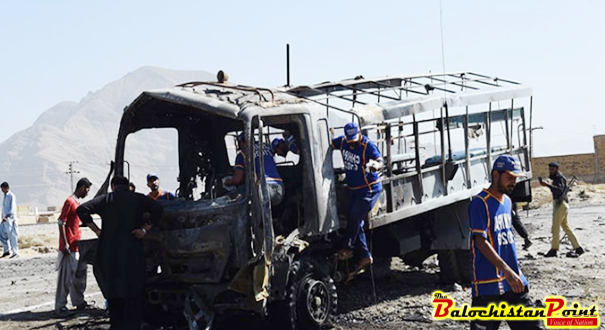 Quetta: Eight people, including seven policemen, were martyred and 24 injured in a bombing in Quetta on Wednesday morning.

According to hospital officials, a truck of the Rapid Response Force was targeted in the New Sariab area of the city around 8:30am while it was transporting personnel for duties.

Hospital officials said eight bodies, including seven of policemen, and 24 injured, most of them policemen, were brought to the Civil Hospital and CMH. Five of the injured are said to be in critical condition.

The truck was carrying around 30 policemen to duty. Sources said several passersby shifted the injured to the hospital as well owing to its distance from the city Centre.

Security forces, including the Frontier Corps, and emergency teams reached the site following the incident. The rescue operation has been completed while forensic and bomb disposal teams are conducting their investigation.
Quetta DIG Razzaq Cheema told media there were general threats regarding an incident of terrorism in the city. However, no group has claimed the responsibility yet.

Speaking to the media, Balochistan Home Minister Sarfraz Bugti said the attack seems vehicle-borne, but added that investigations were being conducted to determine the exact nature of the blast.

He said an emergency has been declared in all the hospitals of the city. “The fight will continue till the last terrorist remains and the facilitator of this attack, like others before, will be traced and brought to book.” Minister added.