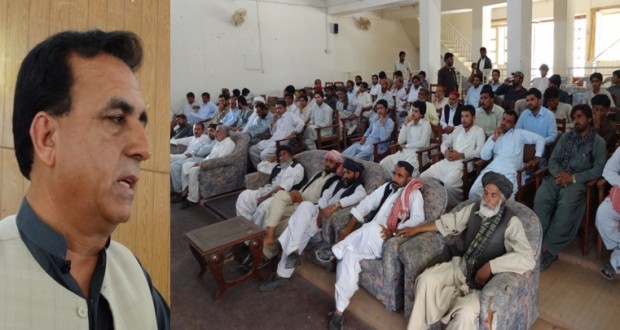 Mr. Zahid Ahmed Mengal told during his speech that Azat Foundation (AF) Balochistan in collaboration with USAID’s Small Grants and Ambassador’s Fund Program (SGAFP) is constructing surface water tanks and installing solar pumps to ensure safe and clean drinking water to the residents of seven villages and the population contiguous to these villages of District Noshki. A total number of 400 HHs as direct beneficiaries and more than 350 HHs as indirect beneficiaries will be benefited.

“The prime objective of this project is to cutback water borne diseases through provision of innovative and sustainable infrastructure and rising on good practices for safe drinking water and hygiene in the two UCs of Daak and Anambostan of tehsil and district Noshki Balochistan. Through this project AF is crafting drinking water supply schemesfunctional through renewable energy sources (i.e. Solar Energy).” Said Zahid Mengal

Zahid Baloch said: “As Maximum of these tube wells (supply schemes) are non-functional either because of some fault in machinery or lack of financial resources on part of community to sustain the fuel (diesel), repair and maintenance costs. The proposed solution i.e. Solar Pumping will replace the exiting diesel engines installed on the tube wells with submersible well pump powered by solar panels.”

A huge number of Political, Social and Literary activists participated and appreciated USAID for this important initiative. They ensured that they will cooperate with USAID-AFB’ team members during project implementation.