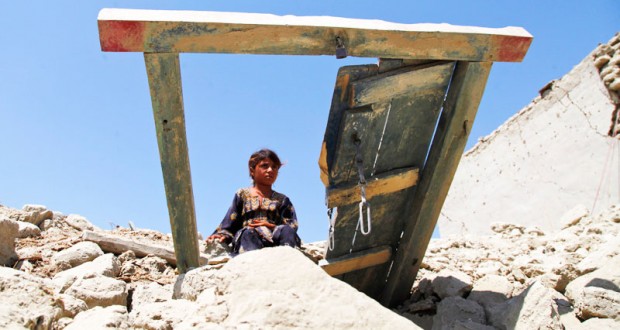 Waiting to be rescued

Thirty-year-old Tariq sits in an open space, almost oblivious to the cold night, as he grieves the loss of his mother after their house collapsed in the earthquake. His family huddles close to him.

Some five kilometers away from Awaran, in need of immediate rehabilitation with a wailing infant in her arms, a frail 27-year-old, Zainab Bibi cries profusely over the loss of her two-year-old son.

A resident of Labach, Zainab was working in the balcony of her house, while her son was inside in a room when the earthquake struck.

“Our house instantly began to collapse,” she says amid heavy sobs.

Zainab’s aged mother-in-law is currently battling for her life at the Awaran Hospital after having sustained serious injuries.

Gazing out at the rubble that was once her home, Zainab’s voice pierces the thick, dusty air, “I cannot forget my son.”

As a result of the aftershocks, almost all the earthquake survivors are suffering from severe psychological trauma.

“It will be a long time before they recover,” Dr. Ghullam Rasool, a well-known psychiatrist stated. Also, mentioning that the importance of psychological counseling was just as significant for these survivors as physical rehabilitation.

However, while psychological counseling will be necessary in assisting them in adjusting to daily life, the surviving residents of the sparsely populated district, are still awaiting basic relief and assistance, three days after the 7.7-magnitude quake struck the province, killing 359 people.

“People here have no choice but to drink contaminated water,” Altaf Baloch, a schoolteacher from Gishkor, 90 kilometres west of Awaran, said.

The earthquake destroyed Baloch’s mud-walled house in Gishkor, forcing him to take his family to Awaran when word got around that government institutions and aid agencies were attempting relief activities in the area.

“We waited till Wednesday in Gishkor, but nobody came,” Baloch said.

The quake-affected area has been embroiled in an insurgency that Baloch separatists have been waging against the government for years. Due to this, relief work has been stalled as rescue workers face grave security threats, leaving the survivors in desperate need of treatment.

Additionally, the already deplorable communication and infrastructure systems, that have taken a massive hit in the earthquake, are worsening their plight.

With the drastically mounting death toll, officials said that thousands have been left homeless and at least 300,000 people had been affected in the remote parts of the province.

“We still fear more people are buried below the rubble of collapsed houses,” Jan Buledi, spokesman of the Government of Balochistan said.

Baloch stated that the survivors were in dire need of tents and blankets.

“Women and children in particular are finding it very hard to cope in these harsh conditions,” he said.

Faced with the dramatic changes in rising and dropping temperatures during the day and at night, people have attempted to build makeshift shelters with sticks and bed sheets.                    ( Courtesy : Dawn.com)

2013-09-27
admin
Previous: Balochistan Earthquake: Pakistan should back calls for International help
Next: Instead of relief to the affected people, the state is creating hurdles: BRP Media Cell