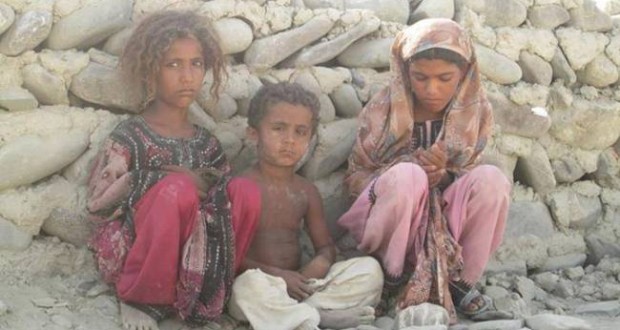 Balochistan Earthquake: Pakistan should back calls for International help

In the aftermath of the Tuesday’s devastating earthquake in Balochistan, head of the Pakistan Disaster Management Authority (PDMA) said they are capable of coping with the situation in Balochistan. People in Balochistan have viewed this statement as a part of a continued policy of discrimination and injustices toward the least developed province. Interestingly, at the same time the chief minister of the province, Dr. Abdul Malik Baloch, was appealing to international donors to come forward and help in rescue and relief operations. The chief minister is aware of the fact that neither the provincial nor the federal governments have the capability to deal with the situation.

It has been noted that whenever it comes to Balochistan, international donors and aid organizations or humanitarian bodies are not allowed to help the suffering people.  Balochistan has suffered prolonged drought in the past decade. It has greatly impacted provincial economy, but international organizations or United Nations teams have never been requested to come forward to help the people. The victims of flood-affected areas in Mekran are still facing hardship to get back to normal life.

No one would ask for more if the government was capable to deal with the situation and met the demands of the people. But given the experiences of the past six decades, it would be appropriate to conclude that international humanitarian organizations should be requested to come forward and help at this difficult juncture.

Three doctors at the time of emergency

There were only three doctors and a limited number medical staff at the local hospital to help the victims of the earthquake. The number of people injured was in thousands in Awaran district alone. There are no basic facilities and all the injured were shifted to either Khuzdar and other nearby districts or to Karachi. That was just the beginning. This huge destruction needs immediate and effective response to deal with the situation in its aftermath. So far, the emergency work is not adequate. Some local journalists from the affected area said many areas are still waiting for help.

Four days have passed and there are still conflicting figures about the death toll and number of injured. Sitting in comfort and taking an aerial survey is very easy. It seems that has become a norm in Balochistan. It would be easier to say “We can deal with the situation by our own” in order to show that Pakistan is not too weak to deal with such small a earthquake. Clearly, the head of PDMA has given the idea how small the earthquake was by making such a statement.

People hear this slogan “We can deal with the situation” whenever it comes to the Balochistan where government does not provide electricity, gas and other facilities in remote areas by saying that the population is small but scattered over vast landmass which is why it needs lots of money to provide facilities.  The province makes up half of the Pakistan’s landmass but its infrastructure is shoddy with many towns inaccessible via road. There are few hospitals with no doctors and schools with no teachers.

The worst affected areas are Awaran and Turbat districts which are severely in the grip of a militant insurgency. Though government officials always blame tribal chieftains for running militant organizations, in these districts purely middle class Baloch people have picked up arms and launched a struggle against the injustices.  However, government should not ignore that people are starving, people are injured and they are burying their loved ones without religious rites.  They picked up arms only to struggle for their legitimate rights that have been denied since Pakistan came into being.

People of Balochistan have complains about the security forces for their alleged negative role and operations in these areas to quash the political struggle of nationalists. That is the reason a huge presence of military and security forces may contribute to more destabilizations in the area. It is time to help the suffering people not to argue whether it can be inappropriate to bring foreign aid instead.  It would be clear to everyone when one visits the rest of Balochistan, not just Quetta and the northern parts. One can easily find out how government responded to natural disasters in the past and how many people are still suffering from that. The quake was terrible and flattened several towns. It is impossible for Pakistani government to cope with the situation on its own.

There are few journalists in Awaran with no facilities and with no salary. Big or small, news channels or newspapers do not hire reporters in Awaran and adjoining districts just because they do not earn revenue from these areas. However, just a few people do work for channels and newspapers as part time jobs for them and they do it as a passion. Sometimes they are shopkeepers and employees in state-run departments in order to run their livelihood. This is another reason that issues of the people are not highlighted and are often ignored.  Now these areas are making news worldwide. That is why big media organizations have sent their reporters to bring stories but after couple of days these areas will be forgotten. Because media organizations do not bother to send their reporters on their own expenses to get follow up stories. (Courtesy: http://shehzi.wordpress.com)