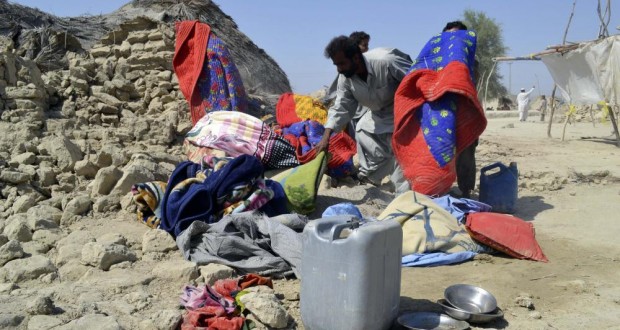 THE wretched of the earth are given the name because their lot never seems to improve. So it is for the hapless communities of Awaran and Kech districts in southern Balochistan, whose already hard lives were devastated by a massive earthquake this past Tuesday.

That nature chose to bare its most destructive face in the same region that has for the last few years been the epicentre of a low-intensity war between separatists and the state surely makes the horrific experience even more difficult to bear.

The army chief went on record for the second or third time some time ago as saying there is no military operation ongoing in Balochistan. In a country where most ‘restive’ regions are effectively designated no-go areas by the state, a large majority of ordinary people tend to take such statements made by our rulers at face value.

Baloch nationalists, along with other segments of Baloch society, are part of the minority that disputes the official narrative. In principle, a democratic political dispensation allows even those who challenge the ‘majority’ opinion to openly air their dissenting view. In this country, formal democracy has provided little respite to those who want to tell the ‘other’ side of the story in Balochistan.

To the extent that there is acknowledgement in mainstream political and media circles of the ongoing conflict in Pakistan’s biggest — and crucially, most mineral-rich — province, the major protagonists of the militancy are caricatured as ‘sardars’. In recent times, the names of Bramdagh Bugti and Harbyar Marri have been bandied about regularly.

Both Bramdagh and Harbyar do indeed have political struggle in their blood. The former is the grandson of the late Nawab Akbar Bugti while the latter is a son of the reclusive and still influential Nawab Khair Bakhsh Marri. They are undoubtedly central figures in the current phase of the Baloch national movement. But some might argue that they have already been upstaged.

While the two heirs to the Bugti and Marri political dynasties predictably generate most of their support from the central regions of the province that are home to their respective tribes, there is increasing evidence that the insurgency’s heartland has shifted south and into an eco-social zone that is far less ‘tribal’ than the prototype to which most of us have been exposed.

Kech district — also known as Turbat — was part of the ‘Makkuran’ princely state throughout the British colonial period, whereas Awaran was separated from Khuzdar district approximately two decades ago. While hereditary landlords and ‘sardars’ have remained a feature of the social and political landscape of Awaran, a landholding elite is conspicuous by its absence in Kech.

It is in this decidedly ‘non-tribal’ context that the Baloch national movement has thrived in recent years. Much has been made of the ascension of a ‘middle-class’ chief minister to the provincial throne over the past few months.

Dr Abdul Malik Baloch’s history and politics are indeed a welcome change from the elite merry-go-round that has been patronised by the security establishment in Balochistan for most of the post-colonial period. It is not only in the electoral realm, however, that the ‘middle class’ has come to the fore. Fate would have it that the new chief minister’s political trajectory is remarkably similar to the man who is arguably at the top of the ‘most wanted’ list in Balochistan at the present time. While Bramdagh Bugti and Harbyar Marri might have the more historically compelling political credentials, Dr Allah Nazar Baloch now has claims to being the symbolic leader of the separatist movement.

A medical doctor by training — as is the chief minister — Allah Nazar hails from the Mashkay tehsil of Awaran district. The chief minister and Allah Nazar were in the Baloch Students Organisation as well as for a time in the Balochistan National Movement before they eventually parted ways. Both proudly celebrate their non-elite backgrounds, and, as it turns out, both are now competing for the loyalties of the people of southern Balochistan.

Prior to the general elections in May, Baloch nationalists claimed that targeted bombings had taken place in and around Mashkay and other parts of Awaran. As I have already pointed out, the security establishment continues to deny that any military action has taken place in Balochistan in recent times.

These contradictory claims notwithstanding, there is no doubting that Allah Nazar and his comrades are considered serious ‘national security’ threats. The men in khaki who continue to dominate major decisions in Balochistan would gladly avail any opportunity presented to them to get their hands on Awaran’s most famous (notorious?) personality. A natural calamity may just be that opportunity.

The earthquake has left no structure standing in Awaran and large parts of Kech. The Frontier Corps along with regular military personnel have been empowered to spearhead the relief operation. Of course, the military has been at the forefront of numerous such efforts in the past, so there is nothing extraordinary about the fact that it will again be leading the line. Yet it would be naive to say that a great deal more is not at stake than just who is coordinating the relief effort.

For the moment we do not even know the extent of the death and destruction that has taken place. It remains to be seen whether our holy guardians provide media persons access to the area so that news about both the damage and relief efforts enters the public domain.

Whatever happens, the people of Awaran and Kech have been dealt a bitter blow. Perhaps it is true after all that there is a divine plan for Pakistan. Those who believe themselves to be ordained to defend this fortress of divinity should bear in mind, however, that the Baloch jury has yet to be convinced of the sacredness of the cause. (Courtesy: Dawn.com)