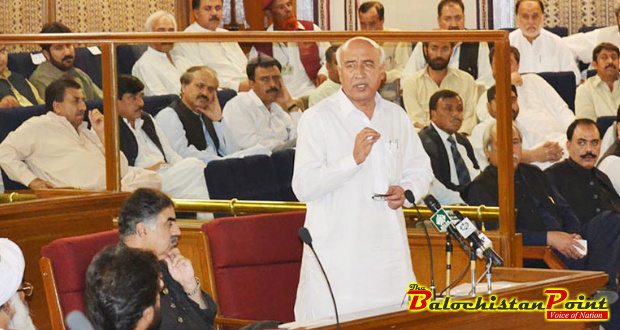 War Against Economic Terrorism in Balochistan

Balochistan is facing myriad problems ranging from insurgency to sectarian violence and bad governance. In such a situation, one of the less focused issues is the rampant corruption in the province which has rendered the government machinery ineffective.  Corruption is not a new problem for Balochistan. In fact the second Chief Minister of Balochistan, Jam Ghulam Qadir, was sacked on corruption charges. However, at the moment corruption in Balochistan has reached an unparalleled height and needs to be checked.

Back in the day, the Balochistan government received a few hundred million from the federal government and hence there was not much to embezzle. That’s why the level of corruption in the province up till 2002 remained in control. The Balochistan government installed by Musharraf in 2002 was the begging of the current wave of unchecked corruption in Balochistan. The 7th NFC award approved in 2009 changed the entire scenario as the province share of federal receipts increased multifold, overnight.

Balochistan government has received Rs. 885 billion from the federal divisible pool since 2009.

Since 2010, the Balochistan government has received Rs. 885 billion from the federal divisible pool. However one can’t see any change in the economic situation of the common people of Balochistan. Not a single mega-project has been initiated in last six years that can improve the economic capacity of the people by generating employment opportunities for masses.

Now, the obvious question which comes to mind is that where this huge amount of money has gone if there is no development on the ground? The answer is simple yet inconvenient: the majority of the funds have been embezzled by corrupt politicians and bureaucrats. According to a report, Rs. 360 billion were embezzled by the government of Nawab Aslam Raisani from 2008 to 2013.

As a result of unprecedented corruption, common people of the province have suffered. While politicians and bureaucrats have been increasing their fortunes and ascending from middle class to the elite class, the common people have witnessed a reduction in their quality of life. Today, 52% people live below the poverty line and 63% people don’t have food security in a Balochistan. Literacy and health indicators of the province are also abysmal. And there is no sign of any improvement in the near future.

According to a report, Rs. 360 billion were embezzled by the government of Nawab Aslam Raisani from 2008 to 2013.

The worst part of this entire scenario is the lack of accountability. From 2002 till now, Balochistan has been a victim of unprecedented corruption but there has been almost zero accountability action against perpetrators. In this context, action against corrupt politicians and bureaucrats is the need of the hour.

During the course of the National Action Plan’s implementation, a new term has been coined for corruption called “Economic Terrorism.” Strong action has been initiated against economic terrorism in Karachi. The arrest of Dr. Asim Hussain along with few other small players from PPP and MQM is a result of that action. At this time, a major favor can be done to the impoverished people of Balochistan by extending the war against economic terrorism to the restive province and going after corrupt politicians and bureaucrats with zero tolerance.

Relentless and objective accountability needs to be carried out with the sole objective of bringing to book, all the corrupt people who deprived common people of their resources. Cut off year for accountability should be 2002 as it ushered in a new era of corruption in Balochistan. Nawab Aslam Raisani government, which had 61 out of 65 members of assembly in ministerial positions at a point in time, should be the prime target.

Relentless and objective accountability needs to be carried out of  all  corrupt people who deprived common people of their resources.

The current Balochistan government which has been in power for a little over two years should also not be spared in this proposed accountability drive. When corrupt people belonging to PPP in power can be nabbed then something can also be done in Balochistan. The incumbent government has managed to maintain the standards of corruption set by its predecessor. In last two years over Rs. 300 billion have been received by Balochistan government but there is absolutely no progress that one can see on the ground.

This proposed accountability drive would have several benefits for Balochistan. It can be used to recover significant portion of the funds embezzled by the corrupt politicians and bureaucrats which can be returned back to provincial exchequer of the province and used in meaningful activities meant for economic development. Similarly, it would also act as deterrence in the way of future corruption. If there is no accountability in the province then the plight of common people of Balochistan will not end even if hundreds of billions of dollars are paid to Balochistan government from projects like Rekodiq.

It goes without saying that there should be no favorites and scapegoats in the accountability drive. Any instance of political victimization will mar the entire process and therefore should be avoided altogether. Having said that no one should be tolerated in anyway even if the person threatens to go to mountains and become a rebel. It must be understood that across the board accountability drive is inevitable if Balochistan has to be saved.