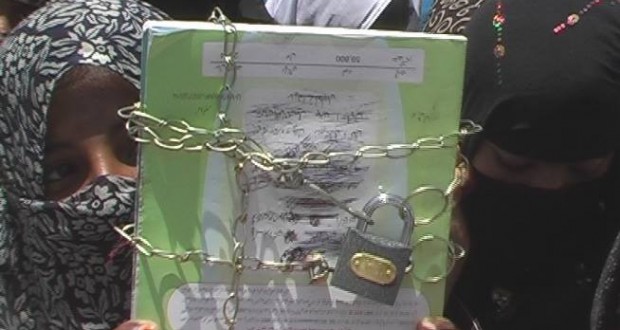 Welcome to the war on “vulgar, western education” in Balochistan

Wearing her traditional Balochi dress, Rabia stood tall with great poise and confidence, in a hall filled with teachers and students, at a local high school in Richmond, Virginia.

This was her twelfth presentation in one week and, by now, she was visibly confident in speaking to a foreign audience in her Balochi-accented English.

Rabia spoke about her hometown of Turbat and the culture and life of the people of Balochistan. Sixteen-year old Rabia is an exchange student in the US. In just one year, Rabia has made a mark for herself and her country; she has been on the honour roll twice already.

Zeenat is a 19 year old female student. After returning from a one-year high school exchange program in the US, she is now working towards bringing change in the lives of young girls like her in her hometown of Gwadar, Balochistan.

An excellent writer, who blogs regularly, Zeenat dreams of becoming a lawyer. In addition to working towards her undergraduate degree, Zeenat is also helping the women in her community learn the English language and gain some basic computer skills.

Both, Rabia and Zeenat, can credit their achievements to their early schooling experience in Makran.

While the government wholly ignored the education sector, there were many young, often self-driven and educated, individuals from the region that moved forward to fill-in the gap.

The youth of the area has remained actively involved in community service and, most impressively, established an indigenous network of private schools and English language centers.

Although these schools are run on nominal fees, they provide the youth with their only life-changing opportunity to acquire basic education, computer and modern language skills.

Panjgur, a district of Makran bordering Iran, is home to beautiful palm trees and is an exporter of the largest variety of dates found in the region. Panjgur has a reasonably large network of small private schools imparting education to girls and boys.

The entire private education network is run by local teachers and administrators. The schools generally cater to both girls and boys, although in some schools the genders are taught separately in two shifts.

With the province of Khyber Pakhtunkhwa affronted by militant attacks on girl’s education facilities, Balochistan, until now, had been spared the senseless violence that has engulfed educational facilities in the north.

Balochistan’s education-based hardships have traditionally been confined to a lack of government support, access and quality issues.

While the region of Panjgur has remained at the center of the Baloch nationalist insurgency and serves as the battleground for military offensives, girls’ education system and allied facilities have never been targeted by any group.

Tragically, it seems, all of that is about to change forever.

Terror in a letter

Recently, all the private schools of Panjgur received a letter from a previously unheard extremist group called Tanzeem-ul-Islami-ul-Furqan.

The letter, addressed to the owners and administrators of all private schools, accuses them of corrupting the minds of young girls by exposing them to a ‘western education’.

It goes on to state that ‘all private schools must immediately disallow girls from seeking an education regardless of them being at a co-education or an all-girls facility.’

It also includes a message for van and taxi drivers in the area, ‘warning them of dire consequences if they continue to transport girls to schools’.

The note goes onto warn parents as well. It asks them to keep their daughters away from English language centers and schools.

Not surprisingly, their threat warns that ‘the mujahedeen of Al-Furqan are ready to brace martyrdom to stop the spread of vulgar, western, education in Balochistan’.

The letter ends with a list featuring names of all prominent owners of private schools in Panjgur.

To assert their writ and spread fear, the group carried an attack on a school immediately after sending out the letters.

Schools in Panjgur remained closed for several days. Soon after their reopening, unidentified gunmen set a school van, transporting female students and teachers, on fire on 14 May 2014.

Although there were no major casualties, the gunmen, belonging to this newly claimed extremist group, ensured the owner of the private school received their message loud and clear.

The owner in this instance was driving the van at the time of the attack. According to eye witnesses, to spread fear and panic, the gunmen fired multiple gunshots in the air – just meters away from a nearby stationed Frontiers Corps (FC) convoy that simply chose to ignore the proceedings.

Interestingly enough, the entire Makran region, particularly Panjgur, is a heavily guarded and militarily-fortified area. Convoys and check-posts of the FC can be seen placed at all district entry and exit points and on every major road and intersection across the locality.

The security forces, who carry with them an abysmal human rights record (they have been accused by local and international human rights organisations of regularly attacking political activists, journalists and student workers), have yet to arrest any individual from an extremist group or a banned organisation.

It is also worth noting that just recently Atta Shad Degree College in Turbat was raided by FC personnel during a book fair. Masterpieces, like the autobiographies of Nelson Mandela, Gandhi and Che Guevera, were brandished by the FC in front of the media – the works were labelled as ‘anti-state’ literature.

Surprisingly, the activities of many religious madrassas, suspected to be recruiting centers and training grounds for extremist forces, have never been disturbed let alone investigated.

The alleged strategy, or rather the folly, has already wreaked havoc in Kashmir and KPK and resulted in Pakistan’s increased international isolation and condemnation.

While it is becoming increasingly difficult for private schools to function in Balochistan (government schools are either non-existent or non-functional in most parts), the numbers of madrassas continue to increase exponentially.

According to the latest figures there are 2,500 registered and 10,000 unregistered madrassas in Balochistan.

It is pertinent to ask, if the national economy is still nudging at a sluggish rate and abject poverty haunting the average man, then where exactly are these funds coming from?

Housed in impressively built fortress-like structures and ably providing lodging and boarding facilities to hundreds of thousands of students, how exactly are these Madrassas sustaining themselves financially?

Where are the funds that are leading to their mushroom growth across Balochistan (a historically secular and pluralist society) flowing from?

These are some mysterious, not to mention uncomfortable, questions – the answers to which the government and the establishment both appear unwilling to divulge.

According to the latest figures, the current literacy rate in the province stands at 56 percent, this also includes people who can barely write their names.

The female literacy rate, at 23 percent, is one of the lowest in the world.

According to the British Council Pakistan’s Education Emergency Report, ‘with the existing pace of growth, Balochistan will not be able to reach the United Nation’s Millennium Development Goals for Education in even the next one-hundred years’.

It was just last year in June when the Sardar Bahadur Khan University was attacked by the Lashkar-e-Jhangvi killing 14 female students.

With the culprits still at large, and rising suspicion amongst the local populace of the state’s complicity in those attacks, the people’s confidence in the government’s ability to deliver at any level stands shattered.

Since the recent warning by Tanzeem-ul-Islami-ul-Furqan, parents of female students in Panjgur have decided they have had enough. They have marched onto the streets and expressed solidarity with the schools and their owners, urging the local administration to take immediate action against the militants.

The prime minister, since taking charge of his office, has been busy signing deals with China on siphoning Balochistan’s natural resources to the rest of the country and beyond. His government’s grand designs include a $12 billion economic corridor extending from the Gwadar deep seaport in Balochistan to the southern-belt of China and parts of Central Asia through spanking new road, rail, air and fibre links.

Local development in Balochistan, especially in Gwadar, is heavily assisted and influenced by the security forces. It almost always excludes locals under the pretext of security concerns and instead utilizes labor and expertise from other parts of the country.

The Baloch people and their welfare is seldom discussed, let alone ever addressed. The functioning private education system, one of the last straws of hope for the girls of Makran, now also stands to be plucked and destroyed by extremist forces and their benefactors.

With little trust in the government or the law-enforcement agencies to protect their lives and property, the local private schools association in the area has decided to shut down schools for an indefinite period.

If this current downward spiral in women’s education continues across Balochistan, disenfranchised and impoverished districts like Makran will not be able to see anymore Rabias and Zeenats in the coming future.

That would not only be a loss for Makran but, more importantly, for the province’s human development and socio-economic progress.

With not much having gone in its way, the last thing Balochistan needs is to have its girls forced to sit at home instead of the classroom.( Courtesy: Dawn.com)

Note: Names of the female students have been changed to protect their identity.

The writer is a former 2012-13 Hubert Humphrey Fellow who has completed her professional affiliation with The Brookings Institution’s Center for Universal Education in Washington DC. She is an avid political and social commentator and can be reached at hinabaloch@gmail.com. She tweets @hinabaloch.

2014-05-21
admin
Previous: Each penny of resources would be spent for the education of the children: Chief Minister Balochistan
Next: Pakistan’s Boko Haram