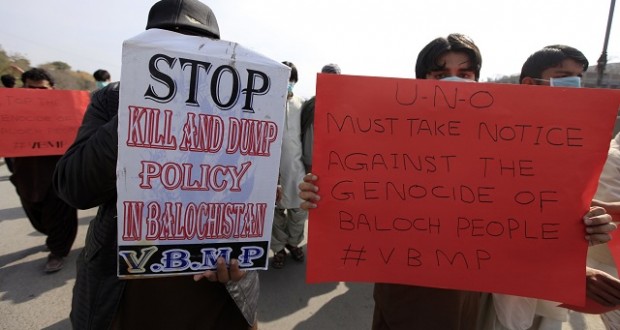 What Is This Country Hiding That It Has To Ban British Journalists?

In line with its reputation of being one of the most hostile places for journalists, Pakistan barred a British reporter from entering the country.

Willem Marx was recently banned after he published Balochistan: At a Crossroads, a book about the unstable and poverty-stricken southern province of Pakistan. Although the Bloomberg TV reporter was heading to another city to attend a literary festival, he was denied access to the country.

The move has yet again prompted questions as to why the government of Pakistan is discouraging journalists from covering the region.

Geographically, Balochistan is surrounded by Iran and Afghanistan and is the poorest of the country’s four provinces, despite the fact that it has vast natural resources.

A brewing separatist movement in the region alleges that the central government is “systematically” suppressing development in their area and committing human rights violations on a large scale.

Moreover, the uprising in Balochistan has created other problems such as the formation of more banned organizations in the country, apart from the Taliban Movement Of Pakistan (TTP),  such as The Balochistan Liberation Army (BLA) and Lashkar-e-Balochistan (LeB).

Last year, a march was organized by a group of people protesting against the alleged human rights violations, including unexplained kidnappings and disappearances in the province.

“As many as 18,000 people from Balochistan are unaccounted for. More than 2,000 mutilated bodies have been found,” Mama Qadeer, the protest leader, claimed earlier this month.

The peaceful demonstration was largely ignored by the Pakistani media.

Mohammed Hanif, a prominent Pakistani journalist and author, said in an interview how a “media blackout” is blocking the dissemination of (any) information coming out of Balochistan.

“The media can first of all let the people of Pakistan know this is what the state is doing with some of our own people; also, they can help raise awareness and at least start debate on this very important issue that has not happened so far,” Hanif stated.

And it’s not just the local press. International journalists such as Willem Marx are also being discouraged from reporting on the issue.

The New York Times reporter Carlotta Gall was reportedly attacked by Pakistani officials while covering a story in Quetta.

Apart from coverage in the disputed territory, on the eve of presidential elections in Pakistan last May, the country’s interior ministry informed another Times journalist, Declan Walsh, by letter, that it was cancelling his visa due to his ‘undesirable activities”. He was given 72 hours to leave the country.

Walsh’s expulsion was widely criticized by the international media, which saw it as a backward step for democracy and freedom of press in Pakistan.

Pakistan is already counted among the worst nations when it comes to practicing journalism and by barring national and international coverage, especially in Balochistan, is only adding to speculations that the government has something to hide. (Courtesy : http://www.carbonated.tv)

2014-03-03
admin
Previous: 2,000 kilometers long march to highlight the issue of Baloch missing persons
Next: Where to now?