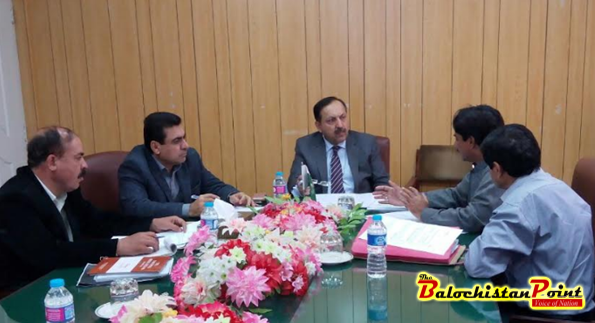 QUETTA:   Secretary Finance Mr. Akbar Hussain Durrani has said that in Balochistan wide range of opportunities  are available in natural resources development mainly to Natural gas, Mines & Minerals, and developing these sectors of Economic opportunities are first most priority of the government ,he was expressing these views while chairing the first meeting of  Board of Directors of Balochistan Energy Company.

On the occasion Secretary Mines and minerals Mr. Saleh Baloch, Secretary Energy Mr. Khalique Nizar Kiyani and others were present. He said, “ after 18th amendment more interventions are needed to boost these specific sectors, and making Balochistan Energy Company is a milestone intervention while making it fully functional is the need of time.”

He emphasized that in the next budget the board would request the competent authorities I.e.; Chief Minister Balochistan Nawab Sana Ullah Khan Zehri for inclusion of funds for the specified company. Furthermore, Balochistan government would appreciate investment in the said economical viable sectors.

Adding more he said that for appointment of the Chief Executive Officer, Chief Financial Manager Balochistan Energy Company would hire the services of well recognized individuals, and for the said purpose all due work was under process.