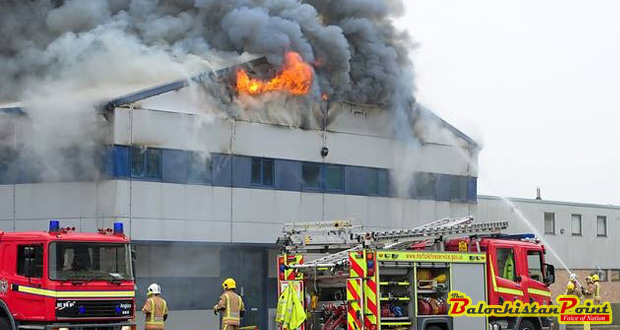 Industrial accidents and fire incidents are every day routine in most industrial cities of Pakistan. Absence of precautionary measures and lack of robust regulatory systems has put the lives of laborers in permanent danger.

List of industrial incidents in Pakistan is very long.  On December 28, 2014, Timber market near Old Haji Camp in Karachi gutted. As a result 250 shops, 50 warehouses and 18 residential buildings were destroyed. In few hours millions of Rupees were lost. After a few Days a fire gutted a market in Lahore and 13 people including a woman and a child were killed, and several shops burnt to ashes.

On April 12 this year, a toxic gas leakage from a chemical tank killed six people including factory owner, in Korangi Industrial Area in Karachi. Arguably the Worst disaster in history of Pakistan took place on September 11, 2012 in Baldia Town Karachi at Ali Enterprises Factory.  259 workers, including women and youngsters died because they were trapped inside the locked premises.

On the first day of 2015, five different fire incidents took place in Karachi that cased loss of millions of rupees. This shows the vulnerability of the Karachi city and industries to devastating fire incidents. Karachi is a congested city where centuries old markets and godowns are located. In Boltan market, Lee market, Joria bazar, Meetadar, Kahradar, Bohra Peer and some other areas, centuries old markets can be found. In these markets, shops and godowns are located in congested streets where vehicles cannot enter. In these areas any little flame would be the cause of big catastrophe and no fire brigade can enter to extinguish the fire. Design of the factories and disregard of building code further amplifies the devastation of fire incidents in Karachi.

Occurrence of Industrial disasters and the subsequent loss of human lives is attributed to insufficient safety precautions on the part of factory owners. This assertion is confirmed by Nazeer Ahmad Baloch who is Security Inspector of LIDA (Lasbela Industrial Development Authority). He states that “no precautionary measures are adopted by factories in LIDA.” He further added “poor fire extinguishing equipments used by the factories is the main reason that fire rapidly spreads before arrival of fire Brigades.”

Furthermore, an official of Gatron Industries located in Hub Balochistan, told this scribe on condition of anonymity that “LIDA is cooperating with industries in Hub but it’s the industries that are not following the law”.  It’s clear that vested interests of the factory owners are major stumbling blocks in the way of controlling fire incidents and protecting the lives of laborers.

Government is urged by laborers and members of civil society to enforce a robust regulatory mechanism where factory owners are forced to abide by employee health and safety regulations.

Author is a freelance journalist and researcher. He can be reached at: Hdilmurad@Yahoo.com

Published in The Balochistan Point on April 28, 2015

Disaster Governance 2015-04-28
Editor
Previous: Letter: Nationalism And National Interest In Pakistan
Next: CPEC Will Be Another Kalabagh Dam If Route Changed: ANP