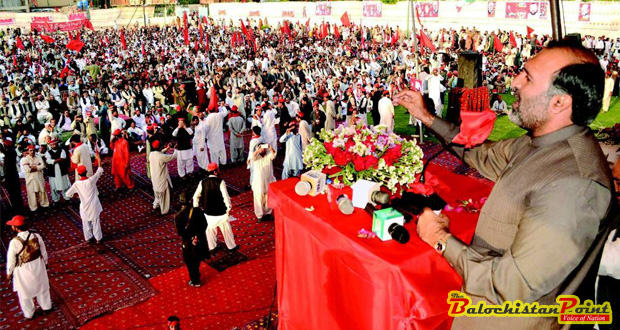 CPEC Will Be Another Kalabagh Dam If Route Changed: ANP

Quetta – Awami National Party (ANP) claimed that China-Pak Economic Corridor (CPEC) will be another Kalabagh Dam project if its original route was changed, on Tuesday.

“Shifting the route of CPEC to Punjab is equivalent to economic murder of Pashtun and Baloch people,” said ANP leaders. “We will resist this change to every possible extent,” reiterated the speakers at the rally.

ANP leaders blamed National Party and Pashtoonkhwa Milli Awami Party for trading the interests of Balochistan for the sake of Chief Minister-ship and governorship.

ANP announced a shutter down stroke on 6th may when Federal Minister Ahsan Iqbal is scheduled to visit Quetta. On 7th May, protests would be conducted all over Balochistan against the visit of Ahsan Iqbal.

“Ahsan Iqbal has called ANP a traitor for raising voice against changes in route of CPEC and such allegations are not new for us,” claimed the ANP leadership.

Kalabagh dam is a proposed dam project situated in Pakistan that has failed to materialize due to opposition of Sindh, Punjab and Balochistan.

Published in The Balochistan Point on April 29, 2015