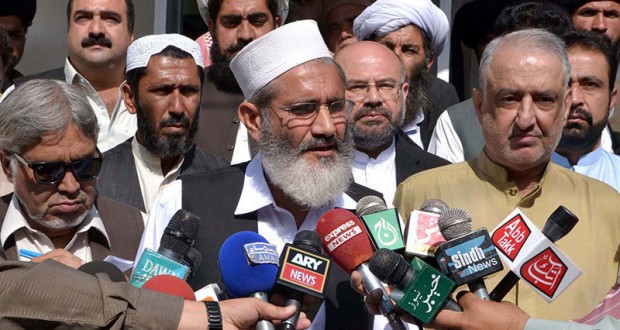 Winning Hearts And Minds Of Baloch Is The Only Solution: Siraj Ul Haq

QUETTA: Winning the hearts and minds of Baloch is the only solution of the Balochistan problem, said Siraj ul Haq, Amir of Jamaat e Islami (JI) on Saturday.

“Instead of pushing [Baloch] people against the wall, they must be embraced,” Siraj ul Haq urged the rulers of Pakistan.

He further said that the grievances of Baloch are genuine and if they had been given their rights they would have never gone abroad, referring to exiled Baloch leaders.

JI Amir criticized the military operations in Balochistan and said that use of force has never solved anything and it has always deteriorated the situation.

Military operations are still taking place in one form or the other, lamented Siraj ul Haq. He demanded the immediate recovery of all Baloch missing persons.

Siraj ul Haq urged the government of Pakistan to engage in meaningful dialogue with Baloch leadership and stop use of force in the province.

Published in The Balochistan Point on November 2, 2014

2014-11-02
Editor
Previous: Refusal By Parents Is The Main Cause Of Polio In Balochistan
Next: Will Someone Please Help The Baloch