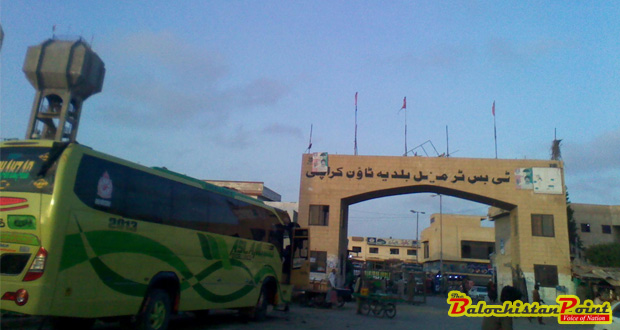 Woes Of Balochistan Passengers While Travelling To Karachi

People of Turbat, Pasni, Panjgur, Gwadar and Ormara are incensed through numerous check posts of coast guards on Coastal Highway. When a passenger bus travels from Turbat, Pasni, Panjgur, Gwadar to Karachi it’s stopped for checking at Gwadar, Nalent, Pasni, Kund Malir and hub. This exercise is nothing more than teasing passengers because on the same route, gasoline and illegal drugs smuggling is going smoothly.

After facing a great deal of inconvenience, when passengers of Balochistan enter Karachi they have to face the criminal behavior of Sindh Police. Policeman performing their duties in areas of Baldia Town, Mawach Goth, Balochabad and Saeedabad collect extortion money of millions of rupees on daily basis from the passengers of Balochistan entering Karachi. Corrupt Policemen of Sindh Police are minting millions of rupees and Sindh government as well as Balochistan government is criminally silent on this issue.

Once upon a time, a person from Panjgur was carrying Rs 50,000 while travelling to Karachi by road. This amount was to be used for the treatment of the ill mother of the person from Panjgur. As per routine, when he reached Saeedabad, the police man stopped the Taxi in which he was travelling. These policemen snatched his Rs. 50,000 by saying that these currency notes are of theft. There are numerous such stories about notorious police of Sindh. A passenger told Balochistan Point that most of taxi drivers are in cahoots with Sindh Police and receive their commission from Sindh Police after delivering vulnerable passengers to their check posts.

When Dr. Malik Baloch became Chief Minister the harsh attitude of Coast Guards towards passengers softened up but the criminal attitude of Sindh police towards Passengers of Balochistan continues. This problem is a national problem and it is requested to Dr. Malik Baloch that this issue should be brought up with government of Sindh. Corrupt Police of Karachi should be reined in and prevented from looting the common people of Balochistan who travel to Karachi.