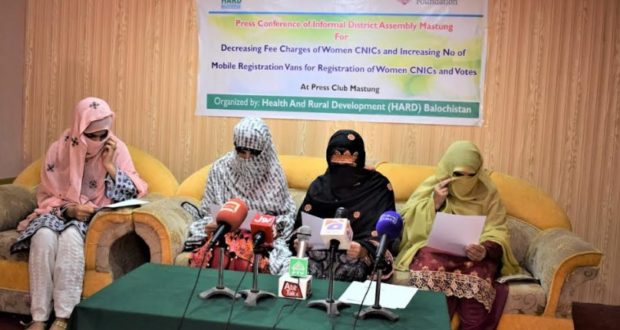 MASTUNG: Young women representatives of Informal District Assembly demanded the Government and legislators to promulgate anti-child marriage law and implement pro-women laws to advance children and women rights and sort out the burning issues of women and public.

“The women and children exploitation, suffering and rights violation is at peak in Balochistan, more than 30 women killed in family honour matters, high rate (63% girls and 22% boys under 18 years) of early and forced child marriage and extreme drought increased the ratio of out and drop out girls from schools and mother mortality rate and, 71 children mostly girls sexually exploited in 2018-19 as per report of Sahil organization and many of them killed after sexual abuse by the culprits to keep their crime undisclosed but the actual figures are more than these because mostly cases remained unreported due to family honour, interference of different influential and lack of access of journalist in many far-flung areas. The recent National Nutrition Survey Pakistan 2019 indicates that 738000 children upto 5 years suffering from acute malnutrition, 73.7 % adolescent girls and boys and 61.3% women reproductive age suffering from anaemia and 51% population facing food insecurity which is an alarming situation in the Balochistan”, exclaimed with sorrows, Miss Shafaq Zaib (Chairperson of Informal Assembly) here on Friday in a press conference held at press club district Mastung.

Miss Fareeda Gul (Deputy Speaker) said that the transgender and people living disabilities (PwDs) are human being and important segments of society facing many issues and experiencing violence and discrimination. The job quota for PwDs reserved 2% must be increased and similarly, job quota for transgender must be reserved as well as a monthly basis stipend must be approved and compensated to the unemployed transgender and PwDs. The transgender first time allowed to avail CNICs (Citizenship) this is because there is dire need to assist and ensure their CNICs and voting registration free of cost. A transgender protection law must be developed, ratified and enforced to advance transgender rights and lives within the province.

Miss Jamila Bi Bi said that in district mustang, the issues like unavailability of schools, teachers, separate girl’s schools and facilities and easy access and increasing educational expenditures impended the enrolment and retention of children this because an immeasurable number of girls are out of school which needed to be covered on emergency basis. The increasing early child marriage incidents with girls snatching their right to education, health, equality, protection, growth, development and participation and increasing their vulnerability risk to sexual exploitation, gender based violence and HIV. The ratification and proper enforcement of anti-child marriage law is the need of hour to safeguard children and advance their lives in Balochistan.

Miss Hameeda from HARD said that the climate change is an emerging major problem that needed to be dealt seriously because overall Balochistan under the perils of climate change for a decade. In district Mastung, the climate change alarmingly is causing desertification, reduction of moisturizing in air and high temperature and it has been affected the groundwater enormously and destroyed the many fruit bearing gardens in last five years and created environmental challenges in the area.

She further that Balochistan Government enacted wildlife act 2014 but the implementation of act is zero because wildlife is in a serious danger in all parts of the province and unbridled hunting resulting wild animals and birds to migrate and also disrupts migration and hibernation of the animals as well as the interconnectedness ecosystem.

Miss Hina said that Local Government Elections must be held on urgent basis because people and marginalized groupss are suffering after dissolution of local government and it is only participatory grassroots level government which ensures improving access to basic services but provides an effective platform to the poor, peasants, workers and women in decision making and development processes.

She added said that currently gender gap, CNICs and lack of participation of women in electoral processes are the major problems in the district. There is dire need that NADRA and ECP increase women CNICs and voting registration and the NADRA reduce CNICs fee and make the procedure simple and easy for women in order that all women avail their CNICs and enjoy their citizen rights. The delimitation of constituency must be revised and demarcated again because many people including women could not cast their vote due to access issue. The constituency needed re-delineated as per the census in order women and other especial people have access to the polling station easily and use their voting power easily.

Miss Shafaq Zaib revealed that there is not a single trauma center in Mastung and there is 01 trauma center in all highways in Balochistan so that a trauma center should be established in district Mastung and also on main highways to avoid any loss of life due to road accidents and The Government must also make the roads duel carriage particularly Quetta to Karachi highway because about to 6000 are being killed on this road in accidents annually. The increasing target killing and mainly religious minority rights created a hostile environment for people especially sectarian and religious minorities. The government and NGOs play their role in promoting democratic values of interfaith and sectarian harmony, peace, tolerance and minority’s rights.

She also said that the increasing high ratio of youth and women unemployment needed to overcome, the provincial government create more jobs and advocate to increase the job quota of Balochistan at federal level.

The young women activists’ urged government to take concrete steps to discourse and sort out women, children and public issues raised in today’s press conference and also requested the INGOs and other donors to assist and respond this critical situation of severe drought and acute malnutrition on immediate basis. The press conference held by Health And Rural Development (HARD) Balochistan and Commonwealth Foundation which has attended by the media men, community based organizations and other notables.

Published in The Balochistan Point on September 20, 2019

2019-09-20
admin
Previous: Pakistan has the second-highest number of out-of-school children in the world.
Next: Balochistan Takes the Lead in Rule of Law Reforms