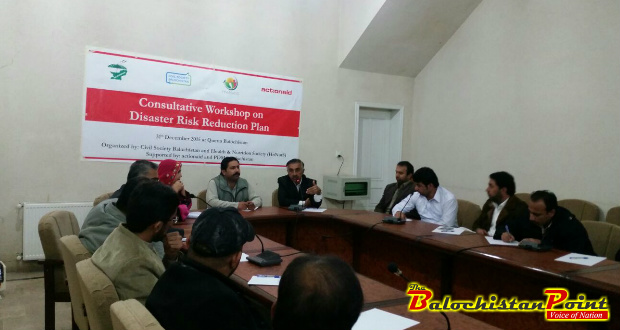 Mr. Mengal criticized PDMA for its lack of interest in helping the drought affect regions of Balochistan. “PDMA has recently issued a tender of procurement of equipment, which is valued Rs. 600 million, but it does not have funds for drought affected regions,” lamented Executive Director of Azat Foundation.

PDMA has recently issued a tender of procurement of equipment which is valued Rs. 600 million but it does not have funds for drought affected regions – Zahid Mengal.

Sana Durrani, chairperson of Today’s Women Organization, expressed her observation that public is not consulted in making policies for public and it’s the root cause of all problems.

“There are just 8 to 10 members of NHN in other provinces and in Balochistan we have 75 members,” claimed Mr. Shah.

Sumera Mehboob of Movement for Rational Change (MERC) told the participants that NHN is open for membership and all organizations can become its members.

Hubdar Ali of IDSP said that accountability of CSOs is must in context of Balochistan.

All participants of the workshop unanimously urged NHN to hold a provincial level meeting to answer the concerns of different stakeholders about NHN.

PDMA was criticized by the participants of the workshop for not attending the event despite being invited multiple times.

Sami Zarkoon delivered the concluding note and thanked all members for participating in the workshop.