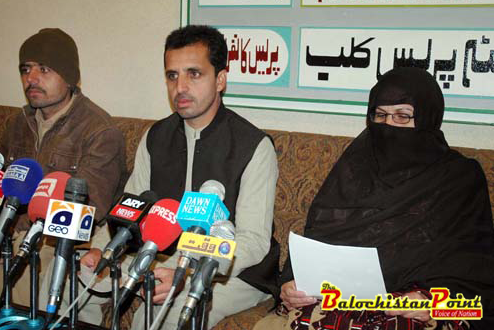 463 People Disappeared and 157 Mutilated Bodies found in 2015 from Balochistan: VBMP

Quetta:   Approximately 463 people from Balochistan forcefully disappeared while 157 mutilated bodies were found in 2015 from Balochistan, Chairperson of Voice for Baloch Missing Persons (VBMP) Nasrullah Baloch along with the family members of missing persons alleged while presiding conference here in Quetta Press Club on Friday.

They said that according to the relatives of missing persons, Human Rights Organizations and other sources, during the year 157 mutilated bodies were found from different parts of Balochistan and 463 Baloch were disapproved.

The Chairperson of Voice for Missing Baloch Persons (VMBP) Nasarullah Baloch said that there could be possibility that the number of missing persons might be much higher than this because government accepted that under National Action Plan; more than 9000 individuals had been arrested.

“Under Pakistan Protection Act, government is bound to tell the relatives of missing persons about their whereabouts and they must be presented in court within 90 days, however, that’s not happening.” Said Nasarullah Baloch

Expressing their disappointment in delaying justice by   Supreme Court they said, “Only four hearing of the missing persons were held while the court ousted the case of one missing persons, last year.”

“Being the only hope Supreme Court   is not taking the most controversial   issues satisfactorily.” They said

Family members of Baloch missing persons urged the court to play its role for the safe recovery of  their loved ones.

Chairperson of Voice for Baloch Missing Persons also criticized the provincial and federal government   and   quoted   the failure of former Chief Minister relating the safe release of missing persons.

They urged the Human Rights Organizations to play their due role   for recovery of   Baloch missing persons.

Published in The Balochistan Point on January 2, 2016