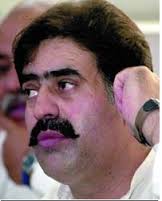 Quetta: Writ of the Government implemented In Balochistan  as Chief Minister Balochistan, Dr. Malik Baloch suspended the services of Superintendent Police City Samiullah Soomro after a clash between personal guards of senior MPA Sardar Sanaullah Zehri and policemen at the entrance of the Balochistan Assembly on Thursday from entering into Balochistan Assembly.

Published in The Balochistan Point on July 18, 2013