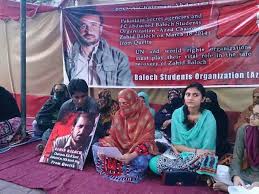 Karachi: Zahid Kurd Baloch aka Baloch Khan, the chairman of Baloch student organization – Azad has been abducted from Quetta on 18th of March 2014.

Vice Chairperson said that she herself and three other senior members of organization were eyewitnesses of the incident, when Pakistani security forces whisked away Chairman Zahid Baloch.

She expressed deep concern about Zahid Baloch’s safety. His life is under serious threat, she added.

BSO-Azad has decided to sit on a hunger strike till death protest against the abduction of their leader outside Karachi press club. The protest will continue until the safe recovery of Zahid Baloch.