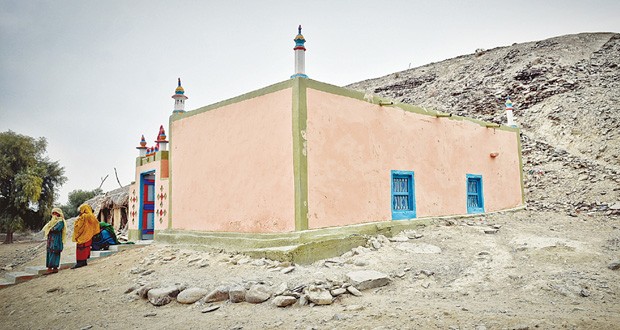 Zikris Under Attack In Balochistan

AWARAN: There is complete silence around the Khana-i-Zikr in Teertej, Awaran, on a cloudy afternoon last week. The fresh paint on the structure of the praying area makes it stand out among the straw and mud-houses scattered across it. A woman, Naz Zaitoon, sweeps the main entrance leading towards the Khana-i-Zikr with her two young daughters in tow. Soon it will be time for the Zohr prayers and men will start gathering for Zikr, she says.

Inside, the praying area has an elevated small concrete brick with shreds of coloured cloth draped around it; some are inscribed with verses while others are plain pieces tied in a knot.

The place came under attack in late August when a few gunmen stormed the place and opened fire, killing six and leaving seven others wounded. There were 30 people inside that day and families sitting outside in a baithak managed to escape the firing.

However, the incident left them fearful and since then, around 400 people have migrated to safe areas while others have stayed back as they cannot afford to move, say locals.

Soon after the attack in Teertej, other cases targeting Zikris were also reported from across Awaran. It included instances where Zikris were identified while travelling and asked to step down and were looted. Even before the attack, cases were reported in August from Turbat and in July from Khuzdar where in the case of the latter, seven men were injured as a result of an attack by unknown men.

In this part of Balochistan, there is now a clear distinction between the Zikris and what people in the town refer to as Namazis. Though it seems like a recent reference, its history can be traced back to the 18th century.

In a chapter titled Zikris of Balochistan in the book, Oxford in Pakistan Readings in Sociology and Social Anthropology, historian and writer Dr Inayatullah Baloch writes: “The principal Baloch sub-groups belonging to the Zikri sect are the Sajdis, Sangurs, Rais, Darzadas, Meds and the Koh Baloch. Some followers of the Zikri faith are also found among the Baloch nomads in the Khuzdar and Kharan regions of eastern Balochistan.”

About the sects’ persecution, he adds: “Zikris faced persecution in the eighteenth century by Mir Nasir Khan the Great, the Sunni Muslim ruler of the Khanate of Balochistan in Kalat. At that time nearly all of the sect’s religious and historical records were destroyed, and the information which survives is from the few religious works which were preserved through oral traditions and the writings of non-Zikris.”

According to historian and writer Dr Shah Mohammad Marri based in Quetta, Zikris can be called ‘pure’ as they are not a mix of any other race. “They are non-settlers. They were born and brought up here and Balochistan is the only place they know of,” he says.

Belonging to the Mehdvi sect, founded in the 15th century by Syed Mohammad Jaunpuri, the Zikris were initially Zartosht (Zoroastrian), then converted and became Sunnis and later started Zikr, journalist Ayaz Sangur explained.

“They believe that a progeny of the Prophet (peace be upon him), known as Imam Mehdi, has already arrived and they reach out to him through prayers and Zikr. They are either found in Hyderabad in India or Makran, Balochistan, while over the years many from the group have settled in Karachi also. Nasir Khan waged a war to convert them and as a result killed 35,000 people, which is remembered as the Zikri-Namazi war,” adds Dr Marri.

A couple of centuries later they came under attack during the rule of General Ziaul Haq, when the Zikris were going for their annual pilgrimage to Koh-i-Murad, in Turbat, on the 27th of Ramazan.

Dr Marri explains, “What people don’t understand is that most Balochi-speaking people don’t get into the nitty-gritty of religion. Majority of them are Muslim by name. In the same family the father can be Zikri and the mother Namazi. What was earlier a planned persecution based on religion against the Zikris, is now being waged for purely political reasons.”

The political reason is that the Zikris, having a strong affiliation with Balochistan, are nationalists in their thought and actions and fight for the resources of the province. Adil Ali, a gatekeeper and resident of Teertej, said he never heard about problems between the two communities, as they are actually one by definition.

Dr Marri adds: “There are fears that their fight for resources might also become the reason for their inclusion in the ongoing separatist movement in Balochistan. As a result of that, you do need a religious or sect-based conflict to disperse and divide the two sides.”

2015-01-02
Editor
Previous: Disastrous Effects Of Closure Of Schools in Balochistan Will Be Felt In Future; Dr. Malik And Allies Will Be Responsible: Malik Siraj Akbar
Next: 455 Bulled-Riddled Bodies Were Discovered Not 164 As Government Claims: VBMP