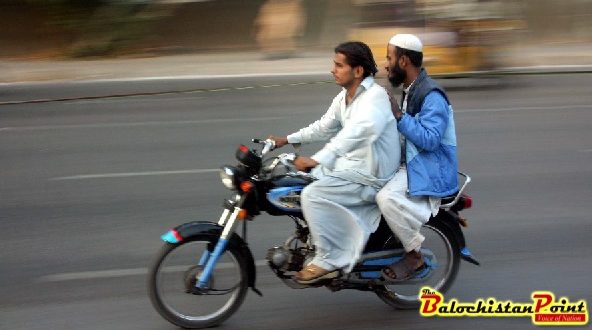 Khuzdar: The ban on pillion ridding was imposed under section 144 on  15-05-2014 when the second biggest city of Balochitsatn Khuzdar was facing security challenges of  target killings, kidnapping for ransom and  terrorism a couple of years before during the administration of ex-deputy commissioner Waheed shah. It was good step to stabilize the security situation of the city as the threatening security dilemma had caused many problems for the citizens of Khuzdar city.

Most of the business tycoons had to shift their business and many other high dignitaries also shifted their families to other cities due to untoward law and order situation of Khuzdar. Peace was totally broken in the city moreover, Robbery was also ubiquitous in all over the city. The deteriorating security situation also led to closure of number of private schools and academies; very experienced and high qualified teachers were reluctant to stay in Khuzdar. No one was safe; target killings were common happenings in the city.

However, Senior citizens, women, children, journalists and personnel of Law Enforcement Agencies exempted from the ban.m

It must be endorsed that the ban on pillion ridding improved the worst security situation of Khuzdar as the city had never witnessed before such security plight and this ban also helped the law enforcement agencies restore the peace as well as improve the law and order situation.

The bold steps & effective security policies of ex-deputy Commissioner waheed shah later on Alam Faraz and now current serving deputy commissioner Sohail Ur Reham have vividly brought back peace to the city due to which Khuzdar is on the path of progress economically and socially. Those people who had shifted to other cities have returned to their city and successfully resumed their business and other activities in khuzdar.

Mr. Sajjad Zehri who is a very well-known civil society member  and  Mr. Fazal Yaqoob who is a student of degree college talking to staff reporter based in khuzdar expressed satisfaction over the current security situation and asked the concerned district administration & home department Balochistan to lift ban on pillion ridding which was imposed a couple of year before due to deteriorating law and order situation.

They said, “Our security situation is much better than before, target killings, kidnapping for ransom and other security related problems have been resolved in the city”. Further adding that they said that district administration and law enforcement agencies need to review the ban and keeping in view the problems faced by the public at large. When the other civil society members were asked about lifting of ban on pillion ridding they also demanded from the concerned authorities to lift ban on pillion-ridding as Khuzdar city is very peaceful now. They appealed to Governor and Chief Minister Balochistan to lift the ban in the greater interest of the people who elected them as their leaders.

Besides, a large number of students are circulating various posts on social media appealing that the ban on pillion ridding may please be lifted in the greater interest of public.

As far as the ban on pillion ridding is concerned, it is indeed very crucial for the security institutes & home department of Balochistan to review the pillion ridding ban and take a decision to lift it according to security circumstance of the city in favor of demands of masses of Khuzdar city & keeping in view the problems faced by the public at large.