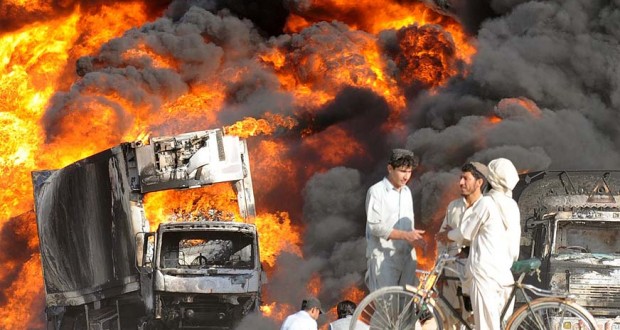 Quetta:  The Home Ministry of Balochistan has said that 141 NATO containers and tankers were looted, torched, seven persons were killed  in last few years . The Home Ministry says that more than a dozen persons were  wounded, while unofficial sources claimed that the number of incidents of looting NATO containers and tankers were  much higher than the officially released data.

Sources said that NATO containers and tankers have been carrying supplies for NATO  forces in Afghanistan from Karachi port by road to Chaman border in Balochistan for about a decade, but since 2006 onward the incidents of looting and burning of containers and tankers not only started but continued rising in different parts of Balochistan mostly in Khuzdar, Mastung, outskirts of Quetta, Kuchlak, Qila Abdullah, Pishin and adjoining areas..

It may be recalled that the former chief minister, Aslam Raisani had admitted in the provincial assembly in  July 2012 session that he was unable to provide security to the NATO  forces transports due to lack of resources.

Published in The Balochistan Point on August 31, 2013

2013-08-31
admin
Previous: Editorial: International Day of the Disappeared and Baloch
Next: Journalism classes in colleges remain pending since 1993