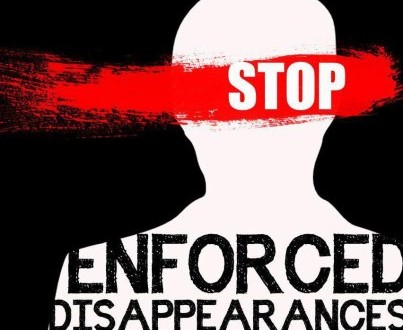 Editorial: International Day of the Disappeared and Baloch

30 August  is marked as The International Day of the Disappeared   to draw the attention of   responsible authorities and human rights organizations towards forcefully disappeared people in the world. On International Day of the Disappearance, Human rights organizations conduct seminars and press briefings to focus the burning issue in world. The case of missing persons is not new in Pakistan; however, this question is still unanswerable in Balochistan.

According to Voice For Baloch Missing Persons (VBMP), an organisation striving for recovery of missing persons, more than 16000 thousand people have been forcefully disappeared, while more than 600 bodies have been recovered since June 2010 . Despite, judiciary attention there has not been any success and missing persons, rather than being released safely they are being killed and dumped.

Although attention of some international organizations there have  not been any remarkable moves for safe recovery of forcefully disappeared Baloch persons. Recently, The International Commission of Jurists (ICJ) and Human Rights Watch Thursday urged the Pakistan government to affirm its commitment for ending enforced disappearances by ratifying the International Convention for the Protection of All Persons from Enforced Disappearance.

“Despite repeated denials by Pakistan’s security agencies, the Supreme Court of Pakistan has acknowledged and human rights groups have documented evidence of the involvement of intelligence and security agencies in enforced disappearances particularly in the troubled Balochistan province.” Says report.

The ICJ and Human Rights Watch called on the Pakistani government to carry out a full review of security-related legislation and ensure that all laws conform to Pakistan’s international law obligations to prevent such violations. “All disappeared persons must be released or, if charged with recognizable crimes, brought without further delay before a court to see if their continuing pearances.” Urged ICJ and HRW

No doubt, the sufferer families of Missing persons in Balochistan have raised their voice  and now the world community is becoming aware of this humanitarian catastrophe, however, it is another question why the international community is silent on this issue. The perpetrators or involved elements in the   ‘Abduct, kill and dump, who think through this tact they will solve Baloch issue and will calm people by terrifying , are quite wrong.  The establishment needs to review its rough policy in Balochistan and to avoid being slandered among civilized communities of the world and international   human rights organizations ,  the responsible authorities have to release missing persons if the state  has political will and wants to make ways for talks for the solution  of Balochistan issue.

Published in The Balochistan Point on August 30, 2013