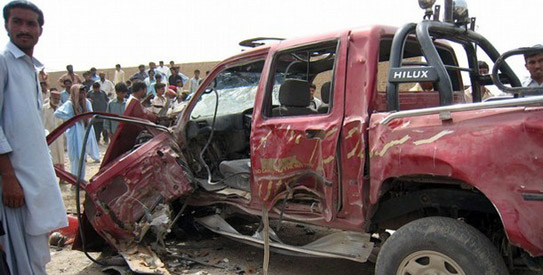 DERA BUGTI: At least two people including a tribal leader a were killed and three wounded in a landmine explosion and subsequent shooting in Dera Bugti Saturday.

According to details, a local tribal leader Zeray Khan Bugti’s was killed while two of his guards sustained injuries when his vehicle hit a landmine planted in Patokh area.

Sources also added that there was no immediate claim of responsibility.

In a yet another incident of armed violence, unknown gunmen shot one person dead and wounded another seriously in Dera Bugti city.

It must be mentioned that dozens civilians and security men have so far either been killed or left handicapped in landmine explosions officials in Dera Bugti.