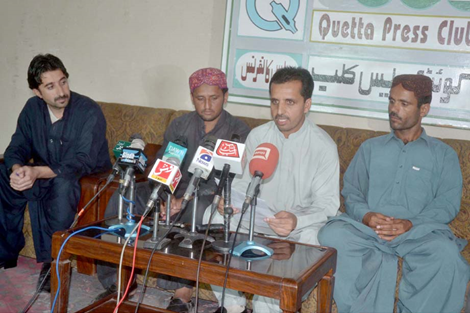 373 missing persons killed in past one year: VBMP

QUETTA: Voice for Baloch Missing Persons (VBMP) Chairman Nasarullah Baloch has claimed that as many as 373 mutilated dead bodies of missing persons were recovered during one year rule of the incumbent government.

Addressing to a press conference here at Quetta Press Club on Monday, he said that the said number of dead bodies excludes the number of dead recovered from the mass graves from Totak area of Khuzdar. He said that only 25 bodies could not be recovered out of the said number, adding that this proves the fact that the enforced disappearances and throwing of the mutilated dead bodies has not abated as least bit.

“We want government to take back its decision and make practical efforts against Pakistan Protection Bill.” He demanded of the government (provincial) to adopt a condemnation resolution against PPO like the Sindh Assembly did. “If it doesn’t go for it, we would consider provincial government a party to the crimes against innocent people,” he said. He said that the whereabouts of three persons arrested on the charges of being terrorist, Innayatulalh, Abdul Fetah and Basham, on 23rd May are still unknown which is making their families all the more apprehensive. (Courtesy: Daily Times )

Published in The Balochistan Point on June 3, 2014