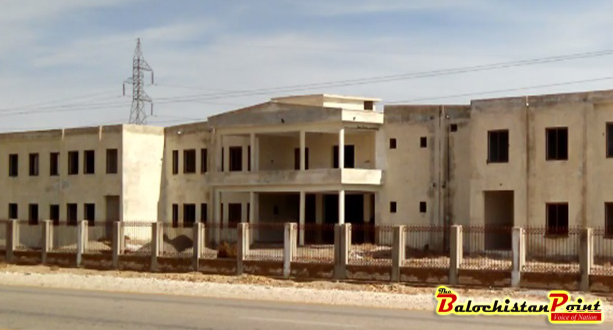 KALAT: Imam Bakhsh, 45, with his wife and two month old baby, has traveled on a donkey cart from Sour area of Kalat district, some 50 Km away from District Head Quarter to get her sick wife and malnourished baby checked by a doctor. However, the destination has not come yet, because they will have to travel 130 km more towards Quetta in a public transport.

Imam Bakhsh said that he would prefer Civil Hospital Quetta,travelling more than a hundred kilometer away, over any major headquarters hospital in his hometown. Though it needs travel and is more costly but the reason he added is simply non availability of basic health facilities at near hospitals.

“I know there is no doctor in Kalat hospital, and we already have a very bitter experience of going to hospitals in Kalat.  Last year my cousin died in the same hospital just due to absence of lady doctors and inefficiency of other staff members,” he alleged.

He was hesitant to mention the death of his cousin but when this author insisted he revealed that it was due to the premature birth of a baby but non availability of proper medical care and facilitation during delivery caused her death.

Imam Bakhsh is not the only one. There are thousands of people who are suffering from this sorry state of affairs in health department. The hospitals are not functioning well in time of acute emergency in Kalat district.

District Head Quarters (DHQ) hospital also confronts significant shortage of clinical staff besides other basic facilities Out of 44 sanctioned posts of doctors and other medical staff members 24 of them are vacant. Therefore, there is dire need of well functional and equipped hospital in the district to provide healthcare facilities to 80.79 % of the population of the district, especially to those who come from far-flung areas with a hope to be treated well but return hopelessly when given only some sedative medicine just for a short time relief.

Knowing the sufferings of people and need for a fully functional hospital in Kalat district, a 50-Beded hospital, worth Rs.194.277 million, was approved and its construction inaugurated in 2009, which was to be completed in 24 months.

However, the construction process was suddenly stopped half way. These days the poor quality of work in its building mirrors a very pathetic state of the hospital. No serious notice has been taken to find out the delay in completion of the hospital building in public interest to lessen the sufferings of public.

The district health authorities seem complain that they had never been consulted regarding this project.

District Health officer Kalat,  Aslam Baloch said: “Although it is a health related project; regrettably, since the very beginning the district health office has never been coordinated with in its planning, budgeting and development of PC I, even the department has no evidence of the allotment of the land for hospital.”

Aslam Baloch claimed that he had no idea about its work order, reasons in delay of construction or any record about it, adding that Construction and Works Department (C&WD) and contact or had kept every data secret from his office.

“If the Hospital is made functional and well equipped with all facilities, the patients from the far-flung areas of Kalat district would not need to go to Quetta, Khuzdar or Karachi for minor health issues,” District Health Officer Kalat added.

Mir Munir Ahmed Shahwani, a local notable and president of Kalat Traders Union, said: “firstly the location chosen for the hospital was unsuitable as it is 10 Km away from city where the people cannot easily access in emergency, in case if the hospital is constructed then doctors and staff need accommodation and facilities which they may not be able to avail there, since we have worst examples of poor facilities for staff even at District Head Quarters Hospital.”

“There is need of a good and well equipped hospital in district Kalat but the designed hospital is not only the waste of resources but also of time,”he added.

However, the health experts deem it a very positive move in district Kalat in case of its completion with facilities and human resource.

District Support Manager Peoples Primary Health Initiative (PPHI), Mujeeb Baloch questions pending construction of hospital for years without any logical reason. He said: “Different operations can be possible and several surgeons   and physicians may be available to serve people after commencement of service in the hospital.  Orthopedic doctors and gynecologists may play their role in this hospital as Mother Mortality Rate (MMR) rate in this district is at its peak.”

The government authorities justify that there has not been allocation of funds to continue work to complete construction of the said hospital.

Sources at Planning and Development Department (P&D) told this scribe that there had not been enough funds allocation for the hospital after 2014.

On the condition of anonymity the source told: “All civil works are still being approved on the rates of 1998.The rates are not premium. In the 18 years old rates the expenditures cannot be covered, therefore, the quality of work   does not remain up to the mark.”

“After mega corruption cases in the finance department allegedly by secretary finance Mushtaq Ahmed Resani, funding and budget allocation of all projects in Kalat district has been stopped.” The sources claimed.

Abdul Rauf Baloch, Additional Secretary Development  at Heath Department Balochistan said that Rs. 127.647 million had been released and utilized before 2015; Rs. 2 million rupees were released in 2016, but allocation of more funds for hospital depended upon higher authorities and Finance Department.”

Secretary Health Balochistan, Noor- ul-Haq Baloch said: “Currently the contractor of hospital is not willing to continue construction process on the rates which were approved in 2009.The project budget needs to be revised and the cost revision is still pending at P&D department.”

Noor- ul-HaqBaloch said that it was not the only project that was lingering on but there were number of such projects which were started in 2009, but could not be concluded.  “The provided funds were not enough for the completion of the project so the contractor left it unfinished. Such issues remained the burning questions in development works of the last government.” He added.

“The construction process was behind schedule due to which the rates increased which automatically raised the cost of project; therefore, the budget requires to be revised with allocation of increased funds” Noor- ul-Haq Baloch said.

Former Member of provincial Assembly (MPA) Agha Irfan Kareem proposed this project in the area and donated 22 acres of land for it.

Agha Irfan Kareem told this author that he had planned to run this hospital with the help of American Doctors Society to professionally train paramedical staff in Balochistan at this hospital.

Agha Irfan Kareem, doctor by profession, said: “It is quite surprising that lack of finance is affecting the project as it was a PSDP funded initiative and the entire budget for this plan was released in a single installment”. The construction pace was very actively going on and more than 70 % of the work was done in the initial 20 months. However, hindrances began developing in its construction since the current government took power.”

“In the current government we felt sluggishness in work and approached authorities to get the work accelerated even we asked to explain if there were any objections. Undoubtedly, If this hospital is functionalized the burden of patients can be reduced in it’s catchment area since only Basic Health Units (BHU) in the district are functional while the dispensaries cannot provide enough services.” Agha Irfan Kareem added.

Agha Irfan Kareem said that they had launched this project in their tenure but it was responsibility of   government of the time to own it and take notice of the delay in completion of the hospital building in public interest to address the sufferings of locals.

Published in The Balochistan Point on February 15, 2017