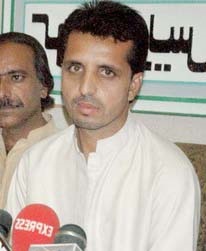 QUETTA: The Chirman of Voice for Baloch Missing person (VBMP) has alleged that In 2013, 510 people were picked up by intelligence agencies from different areas of the province and 161 people were extra judicially killed in torture cells.

Talking to journalists in a press conference in Quetta press club, Chairman Voice for Baloch Missing Persons (VBMP) shared  that  security forces were  not acting the orders of the supreme court and violating the judiciary and constitutional laws, which showed  that they were  above the judiciary and laws of the country.  There was no one to ask them about the violation of the laws and human rights.

The VBMP’s chairman also showed his frustration   on provincial and federal government.

He feared that in case of passing ordinance would empower illegal actions. “It is better to implement a law to reduce the power of security forces.” Said Chairman VBMP.

“Voice for Blaoch Missing persons is a nonpolitical organization and peace fully struggling with the family members of the victims in the plate form of the organization, we have knocked all the door of the institutions of country for obtaining justice but instead of justice we are being threatened form different ways by security forces.” Said Nsrullah

Nsrullah Baloch said that he was receiving that’s for their  peaceful struggle. “The participants of the long march are now going to Islamabad and Mama Qadeer is continuously receiving threats, we condemn such actions.” Said Chairman VBMP.

“The federal and provincial government will be responsible if something happened to us including my organization members ,If our beloved ones are culprit so they must be produced in any court of law or if they were martyred during torture so they must inform the victim’s family members.” Said Chairman VBMP

2014-01-01
admin
Previous: Quetta and other parts of Balochistan in the grip of severe cold
Next: BNP-Mengal leader killed in firing