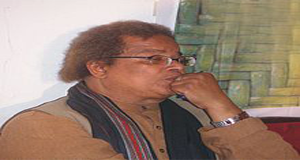 une 1st marks the second death anniversary of Prof. Saba Dashtiri. Born in Karachi in 1953, Saba, served Balochi literature for three decades. He was simultaneously, a fiction writer, poet, critic, research scholar and above all an intellectual with liberal espousal. He has to his credit more than a dozen of books ranging from literature to philosophy and religion. Apart from his fiction work, Balochi zoban ay aaqibt (a compiled work on Balochi linguistic), Gul kar o chakan kar (analysis of various poetic genres) and Angaren wahag (literary criticism) can be placed among his best known contributions in the field of Balochi literature. He also compiled the voluminous bibliography of Balochi literature, published in past five decades.

Although he generally contributed to all forms of Balochi literature, fiction was his mainstay. So for three collections of his short stories namely Hon o Hosham, Trangaani Bonzeh and Aas o Aaseb, are published in 1994, 2001 and 2006 respectively. What marks him distinguished in the realm of Balochi fiction is the subject he picked for his short stories. Belonging to a middle class family of Lyari, Karachi, in most of his stories, he poignantly portrays the woes of this deprived class; a subject hitherto untouched upon by any other Balochi fiction writers. Short stories such as Lyari ay jyala, Aas o Aaseb and Dardan kay bemaarit depict the unending socio-economic plight of the lower middle class Baloch community of Karachi.

Though Saba led a life of celibacy, he had an intense feeling for the endless pain and miseries of women. In a number of his short stories he touchingly narrates the sufferings of the dejected and marginalized Baloch woman. Stories such as Dood (the custom), Sunt (the barren woman), Hon o Hosham (blood and thirst), zird ay trambol (a boil on the heart) and Jeeg bund ay Ars ( And overflowed the tears) reflect that how pitiful is the life of Baloch women.

Jeeg bund ay Ars (And overflowed the tears), included in the second collection his short stories Tranagani Bonzih (In-depth Memories), is one such story that narrates the sorry tale of a dejected widow, Sammi, hailing from the tribal belt of Balochistan.

Tragically shunned by her relatives soon after the death of her husband, the ill-fated widow lands in Karachi in search of food and shelter but fails to find any means of subsistence. Finding no way out, she opts for the worst profession she would haven’t even thought for a moment during her not-too-good old days: street begging. Later on, she comes across another woman who took her to a factory where along with some other women she began working to eke out an earning.

The short story ranks a 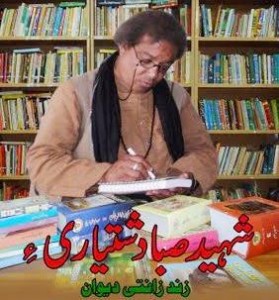 mong Saba’s good works of fiction which on one side brings to fore one of the bleakest aspects of tribal customs still in vogue in our Baloch society. Women are blatantly denied the right to inherit their fair share from the property of their deceased husbands, parents and brothers. Even worst, to preempt the possibility of any claim for the same right, at times women are shamefully married with the Divine Book. No doubt women over the years have been the worst victims of male chauvinism in the feudal, male-dominated society of Pakistan. Such a society mainly believes in power dynamics to perpetuate its hegemony over women. They are treated worse than cattle. Their plight is lamentably voiced by Sammi the protagonist of this story:

“For a piece of bread I was disgraced and humiliated and treated like animals”.

As a poet, Mr. Dashtiari wields equal command over both genres, gazal and free verse. However, he did not follow the cliché of traditional Balochi romantic poetry. Mainly gaining inspiration from stalwarts like Mir Gul khan Naseer and Syed Zahoor Shah hashmi, he distinctly highlights the sufferings of his people. His free verse is somewhat an extension of Gul Khan Naseer’s voice:

I am preoccupied by a dream,

When comes the day,

A legend of my clan would break the shackles,

That have long enchained my dejected people. (My Dream).

In the territory of darkness,

It is a sin to long for the dawn,

The glittering ‘sun’ has been assassinated,

And the moon is suffocating. (Look! How helpless is the life.)

Beside gazal and verse, Mr. Dashtiari was also inclined towards Japanese poetic genre, haiku. His collection of haikus, Gungdamen Sarzameen (the silent territory), is up to now the only book on this genre in Balochi literature. He is the only liberal Baloch poet who overtly condemns the religious fanaticism and intolerance prevailed in our society. A number of his haikus reflect his intense love for humanity and hatred of extremism:

Torch not our homes
Don’t make our life hell.In the name of religion,

Be it Kaabah or a temple.

(Note: These translations are not in accordance with the syllabic structure of original haikus)

In 2003, he founded the Syed Hashmi Reference Library (SHRL) in Malir Karachi. It is the biggest library of Pakistan in terms of books on different aspects of Baloch culture and literature in various languages. The prime objective behind the establishment of SHRL was to collect and preserve whatever has been written in the past and being written today on Baloch, Balochi and Balochistan and to provide a resource centre to those who wish to explore the subjects mentioned earlier.

Another objective tagged to SHRL was to arouse awareness among the Balochi speaking public of Karachi, regarding the importance of their mother language, Balochi. It also aimed to ameliorate the poor standard of Balochi readership across Karachi and Balochistan. As Balochi lacks official supervision and not being taught at school level, a vast majority of people even cannot properly utter pronunciations while reading text in Balochi, let alone writing. 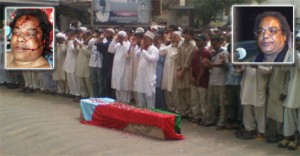 The SHRL introduced various basic certificate courses in Balochi language across Karachi and various cities of Balochistan. Mr. Dashtiari himself taught these classes in Quetta and Karachi which attracted a number of students. He attributed the SHRL to as the first step towards the destination: The International Institute of Balocheology. In the last days of his life, he was relentlessly working on the Encyclopedia Balochistanica; the maiden encyclopedia in Balochi language. Unfortunately, his cold blood assassination terribly interrupted this important project.

In 2003, the government of Pakistan awarded him Tamgha-i-Imtiaz for the meritorious services he rendered in the field of Balochi literature. However, he returned the award back to the government in the wake of Nawab Akbar Bugti’s assassination, protesting against the brutal murder of the veteran Baloch leader.

After the demise of Syed Zahoor Shah Hashmi, undoubtedly, Mr. Dashtiari’s killing was the biggest loss Balochi language has suffered in the past four decades.

Now what is the need of the hour is to continue his mission with the same vigor as he did till the dream of his vision institute (the International Institute of Balocheology) comes true.