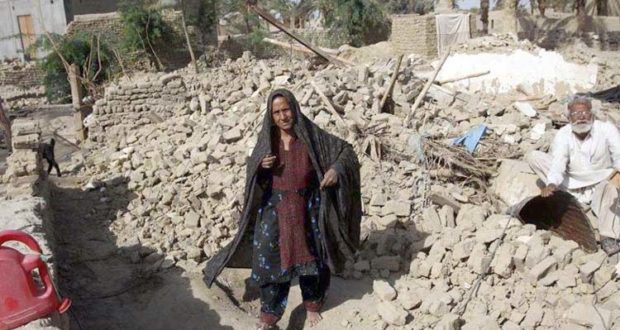 Earthquake in Balochistan has left a great suffering for the people of district Washuk in Maskel city. The recent natural calamity is going to turn in to human made disasters because of no remarkable relief activities. The government authorities have sufficed with only few activities for mitigation of the victim’s suffering. The controversial statements of government and earthquake sufferers demand for more help and assistance moves.

On 16 April 2013, Balochistan witnessed another devastation, when an earthquake occurred with an epicenter some 82 Km below the surface in Iranian Balochistan, however, it also shocked Washuk district of Balochstan where it badly affected Mashkel city. Hundreds of houses collapsed to ground and thousands were partially damaged. Due to the collapse of mud-houses more than 80 people died. The earth quake was measured 7.8 on the Richter scale. Though the epicenter was Iran, number of causalities occurred in Balochistan.

The earthquake has badly jolted Mashkel in district Washuk, where most of its mud houses were destroyed. The aftershocks continued twice, which sent a wave of panic across the border town. According to local people the earthquake has erased more than 2000 houses   and number of shops in the hit area. Nevertheless, there are differing reports from the government, its agencies and the journalists. The director  general of Provincial Disaster Management Authority P.D.M.A in a press conference expressed: “The calamity devastated  the bordering  town  of Balochistan  with  Iran  left 1500 mud-houses  completely  destroyed   while 400  partially damaged. Road network to Nukundi and Nushki and Maskel area was disconnected.

The government relief activities are confined to small area of Mashkel, whereas, the residents of the area claim the death of   hundreds of people. The Deputy Commission D.C   Washuk said that only 12 persons had lost their lives while 25 injured.” The ISPR had confirmed 40 deaths but the local communities claim deaths more than 80 women, man and children.

However, the district coordinator of Balochistan Rural Support Program B.R.S.P quoted their rapid survey that over 12,000 people have been affected by the earthquake in Mashkail,”. According to the survey of Balochistan Rural Support Program B.R.S.P, 3,200 homes have been either damaged or not livable. Due to the lack of shelter in earthquake hit areas the victims are forced to sleep out in the open area in nights.

Currently a large number of affected people are suffering from gastroentity, sanitation facilities, nutrition issues and shelter. The lack of facilities can cause diseases and death of children. The local affected communities claim for not receiving any relief from the Government authorities.

It is reported that the Earthquake Reconstruction and Rehabilitation Authority E.R.R.A along with other officials visited the affected areas and decided to build transitional   shelters in the first and cemented shelters in the next phase in Mashkel. The director general said that in view of little health and education facilities available to the people in the Mashkel. Earthquake Reconstruction and Rehabilitation Authority E.R.R.A also promised for hospital and schools to build.

As the past experience once again Balochistan has been neglected and government sufficed with only few packages of food commodities. Mainstream media has also ignored the earthquake hit area of Balochistan. The media has not exerted extraordinarily to enlighten the devastation to pressure state authorities for the support of the affected population. The state authorities have also paid a deaf to this gigantic human catastrophe, although it is election session, the candidates of the area who are going to participate in the upcoming election are also passive to provide relief or find any source for affected people.

Though the government is said to have initiated relief activities, however, it will take for years to recover because Balochistan is already deprived and people suffer from lack of basic rights in their daily life on the other hand such calamity is another misery for the already deprived communities in Balochistan. The Government, mainly, international organizations are required to initiate relief activities in the fields of nutrition, sanction, health and education. The support from international community and donor agencies can be helpful enough for the communities to assist them start normal life.

Published in The Balochistan Point on May 26, 2013