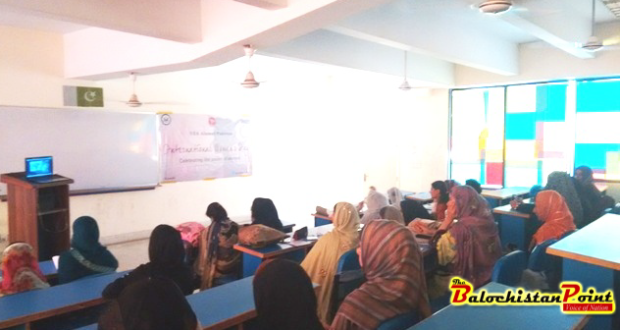 YES Alumni Celebrate the Power of Women in University of Karachi

Karachi: YES (Youth Exchange and Study) Alumni celebrated “The Power of Women” as part of International Women’s Day celebrations in University of Karachi  this Friday during one-day extensive workshop.

The participants had the opportunity to discuss persisting issues of women in restricted societies and various strategies that may help  reduce the issues if not end them at once. They identified that if young girls are educated and not socially restricted, they may turn into liberal and progressive minded women and produce well-functioned and organized families which are the basic institutions of a society.

In our societies women are surrounded   with thick walls of restrictions, often named   as “honor”, to make women feel that they are respected and sacred.In actual this word exerts like a tool to have their life’s total command. And the same word “honor” wraps her mind and lips with chains and keeps knocking her head from birth to death drying up her soul, snatching the actual contents of her own life from her.

Sharing her ideas on equality, Saba a student of sociology said, “We do not talk about equality that divides us in different “genders” but we want equality as “humans” who can have same feelings, dreams and desires.”

The success stories of various influential women were shared from the same patriarchal society who have set excellent examples by the use of different strategies to defeat the barriers that surrounded them.Two of the prominent stories were of Sharmeen Obaid, the filmmaker who received the Oscar Award twice for unveiling the painful chronicles of women and Kalida Brohi who used innovative strategies to unleash the potential of rural women and save them from the horrifying tradition of honor killing.

“There are a number of ground realities that we need to raise awareness about but we rather prefer hiding them and when someone hardly ever tries to unveil those bitter truths, our society criticizes them. Perhaps we are habitual of what we want to hear, not what the reality is and try to suppress the unheard voices more and more,” Lamha, a student of sociology shared.

During the group presentations one of the participants, Sassi seemed more concerned with the basic rights for women for instance: social security, health care, education and a right to take major decisions of life which they are often denied to.

Sassi explained, “There is a need of awareness, even convincing and policies to change the mind set of people. In many cases women face severe health issues but when the point of family planning is raised by some nonprofit organizations, often this important issue is disregarded because it is considered against culture and religion.”

Most participants were concerned with the social issues following women as shadows which are indeed one of the major barriers for many nations in the world to enter the globalized progressive world.

Mariyam is Staff Reporter at The Balochistan Point. She mostly writes about Balochi literature as well as social issues and human rights issues in Balochistan, She blogs at mariyamanalblog.blogspot.com