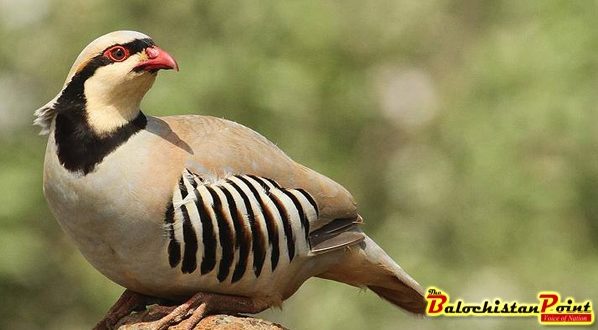 The Balochistan province is blessed with hundreds of thousands of species of plants and animals, varying from the ibex, black bear, brown rabbits, markhor, tortoise, migratory birds, including zaarhi, zark (chakor), Sisi and even the tiniest mouse of the planet Earth, the pygmas jerboa.

With no doubt, Balochitherium is one of the largest land mammals ever existed on Earth and it extincted being discovered by a French paleontologist Jean-Loup Welcomme in the Province of Balochistan in Dera Bugti district. Pygmy Jerboa mouse, which is equal to the size of a cent was first discovered in the Chagai district of the province by J.A Anderson.

From the salty seas to the barren deserts and from the deep oceans to the bleak plains, wild animals native to the province face the ongoing threat of cruelty and annihilation which is exceeding without any respite in Balochistan.

A farmer from Kolahoo narrates, ” Druchk (Finch,a migrotory bird from Sibera to Balochistan in the summer season when wheat crop harvest is on rise) was in abudance in those days and we couldn’t get rid of pests but these faced the ongoing threat of over hunting and now one can rarely encounter the bird and there aren’t any measures to reduce this exceeding hunting.”

Among the other fast disappearing wild animals, the native markhor and Ibex species are also fading rapidly from the mountains and forests.The species are facing poaching and illegal hunting.These complicated web of cause and effect is upsetting for the entire natural ecosystem.

Marine animals like dolphins, whales, marine turtles and leather back turtles are facing extinction too in the Arabian sea and rivers.

My recent visit to Gwadar, I could barely see a single part of the beach and coast clean. Plastic bags and other items have doubled the threat of the marine life. It is mentioned that plastic bags degrade slowly__polluting waterways and it is tragic that scientists believe that there will be more plastics than fish in the sea by 2030 if there aren’t any actions taken.

Besides, it is a far cry that in remote areas of Balochistan every second person is a hunter which remains not only a big threat to finch species and other animals but it remains a constant threat to the complete wildlife.

In my early childhood days, half decade back, whenever I,with my friends used to go in the mountains for leisure time we would see foxes and rabbits but in my recent visit I could hardly see or encounter a single of them.

The government hasn’t taken any concrete actions and organizations like SUSG-C Asia is also working in collaboration with wildlife and forest department of Balochistan to preserve the extinction of wildlife.

Unfortunately, unlike others World Wide Fund for Nature (WWF) and International Union for Conservation of Nature and Natural Resources (IUCN) are paying less attention towards the safeguard of biodiversity and animals native to the province.

Instead of protecting our wildlife, we are bent on appeasing the Arab sheikhs through ‘hunting diplomacy’.

To arrest the decline, the government must include a syllabus regarding the significance of biodiversity and it should be shared with schools to bring awareness to the youth of the province about the amazing natural heritage that is theirs.

And every Baloch parent should tell their child about beautiful forests and animals native to Balochistan. Most importantly, while some funds from the China-Pakistan Economic Corridor should be earmarked for the protection of wildlife.

It is our responsibility to protect and save the nature and its beauties. If not, then we won’t be able to look at the animals of Balochistan in real life but in photos only.

The writer is a regular writer to the Balochistan point and is based in Turbat.

Published in The Balochistan Point on October 22, 2018