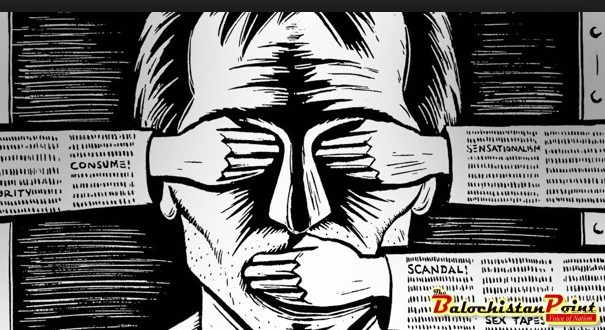 A bleak outlook for press freedom in Balochistan

Although, Pakistan has constitutional guarantees of freedom of speech, expression and press, according to Amnesty International 2017-18 report, the crackdown on freedom of expression is growing. With no improvement, this year Pakistan again ranked 139th out of 180 on annual World Press Freedom Index released last month. As much as cases of attacks on journalists and threats to media houses in provinces with larger population have contributed to this deteriorating situation, Balochistan, as one of the deadliest places for journalists, has also contributed equally for such instances.

In its annual report, Freedom Network, a Pakistan-based media rights watchdog, said that out of every ten cases of attacks and violations against media and journalists in Pakistan, two cases were from Balochistan.

In the last two decades, press freedom in Balochistan plunged to worst levels where journalists faced violence, prosecution, and assassination. Several newspapers were blocked while last year threats forced the closure of press clubs across Balochistan for a period of three months. At least more than 40 journalists were killed in the last fifteen years in Balochistan according to media reports.

In the rest of the country, the Prevention of Electronic Crimes Act 2016 was used to harass and subjectively detain human rights defenders for online journalism and comments specially on blasphemy-related cases – in Balochistan with limited access to internet in most of its districts, there has been very little role of this law and its consequences. Instead, there is a different list of predators of press freedom, intimating and target killings of journalists. Being critical of the government policies and running stories of human rights violations in Balochistan have reportedly remained one of the top dangerous things in the list.

Many believe this increased government censorship and decline in press freedom, in Balochistan, amplified after the assassination of veteran Baloch nationalist leader and former Chief Minister Balochistan Nawab Akbar Khan Bughti in 2006. It was when human rights abuses in Balochistan faced a black out from the mainstream media and journalists or news outlets covering such issues faced severe consequences by law enforcers. In 2009, the offices of widely read and distributed Asap – a “nationalist” daily newspaper were closed down and the editor in chief after surviving an assassination attempt was forced to go into exile. This process of blocking newspapers continued and consequently Baloch Hal, Balochistan’s first independent web-based English language newspaper was blocked, distribution of Daily Tawar, a widely read newspapers in Balochistan, was halted, access to a Baloch human rights blog and several other websites covering stories of human rights violations were blocked. However, not all newspapers faced the same fate, some, including daily Azadi and Balochistan Express continued to suffer.

This technique of threatening the press freedom worked, and ultimately rather than risking their lives, most journalists quit publishing about the human rights violations and on-going movements, meanwhile many international organizations including; Committee to Protect Journalists named the province as one of the most dangerous places for journalists.

On the contrary, the press in Balochistan last year paid another price – Press clubs across Balochistan were forced to remain close by the insurgent groups and distribution of newspapers was halted after an ultimatum issued in October last year. At one end, state actors have restricted journalists in Balochistan with threats to remain in a limited circle and on the other end, they are pressured by the insurgent groups to publish their statements. This ultimatum was followed by attacks at a news agency in Turbat and press club in Hub Chowki, Although, the press clubs were reopened after three months, but the air is still filled with fear while press freedom does not exist in the region anymore.

Today Balochistan faces near total control of news and information. Unfortunately, not only the authoritarian regimes, but freedom of press is under attack in a “democratic government,” which has definitely affected Balochistan but Pakistan’s largest news outlets and channels are no more free to cover many important issues either, specially the on-going civil rights movements in the country. Where the presence of constitutional laws guarantees protection of all citizens and allows freedom of expression and press, there is near to no implementation of these laws.

Published in The Balochistan Point on May 5, 2018

2018-05-05
Editor
Previous: Balochi Embroidery: A significant facet of Balochi culture
Next: MMR: Who should mothers hold responsible for their death in Balochistan?