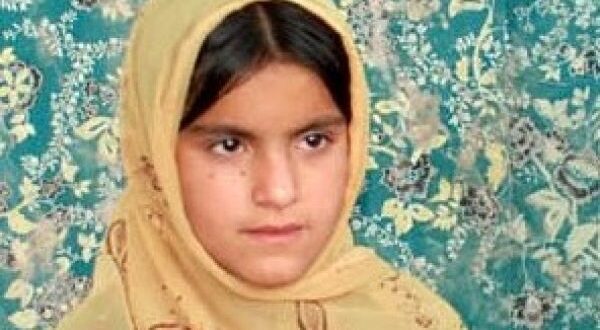 A Daughter’s Struggle for Her Father’s Safe Recovery

Restlessness, worries and agony of a little girl become beyond measure when she loses her doll or another thing that she loves to spend time with, playing and amusing herself. But one fails to translate the sentiments of a little girl who has lost her father at an age when she should be playing and studying. Instead, she finds herself striving to get him recovered. Mahlab Baloch is the daughter who finds herself amid a seemingly unending struggle for her father.

Mahlab, 9, is the daughter of Din Muhammad, a medical doctor by profession. Muhammad was allegedly picked up by the personnel of Pakistani security forces on June 28, 2009 in Ornach, a tehsil in Khuzdar district, while performing his duties in a local hospital. Since the abduction of Muhammad, his daughter has been toiling for his safe recovery from the platform of Voice for Baloch Missing Persons (VBMP), an organization that relatives of Baloch missing persons have formed to compile the data of disappeared Baloch doctors, lawyers, journalists, human rights defenders and political activists and to protest for their recovery.

Recently, Mahlab held a news conference at a hunger-strike camp set up by VBMP. She shared updates of her struggle for the release of her father. She said that no measures had been taken to recover Dr. Din Muhammad though statements have been recorded before the Supreme Court of Pakistan, Balochistan High Court and Judicial Commission and Investigation Committee. She appealed to humanitarian organizations to intervene into the matter and perform their expected role for the release of her father.

Nine years old Mahlab is a student of fourth class but since she started the struggle for the recovery of her father, she quit her studies. She has been to protests and hunger strikes inKarachi,Islamabadand in several districts of Balochistan with other relatives of Baloch missing persons.

At an age when she is supposed to be at home busy with her dolls and books, she is on roads, in biting cold or scorching heat, for the retrieval of disappeared Balochs. She has not been home for a long time. Not only the life of Mahlab Baloch has totally become disturbed but also her whole family is suffering from anguish when they hear of mutilated bodies of abducted Baloch being found on daily bases in different parts of Balochistan.

In a recent interview with a Balochi English Magazine Bolan Voice, Mahlab said that she has a brother and a sister. Her brother is a student of 10th class. In the morning, she said, he goes to study and then labors second time to earn for their family’s sustenance. Her elder sister is in 6th class. In the interview she disclosed that she had suspended her educational career, but she said she would continue striving and protesting. She would not go back until the release of her father.

Family members of missing persons are in pain because of the continued recovery of tortured and bullet-riddled bodies of their loved ones. Many of the relatives of the missing Balochs had to leave the hunger-strike camp when the bodies of their loved ones were found in deserted areas in different parts of Balochistan. Unfortunately, efforts of Voice for Baloch Missing Persons have not yielded any remarkable success. Missing persons, rather than being recovered safely, have surfaced as dead.

The role of Mahlab Baloch has encouraged Baloch women and children to join the movement and play their due role to pressurize the judiciary and other elements involved to surface the whisked-away Balochs. They have also been able to get the attention of international media, human rights organizations and the international community.

There are thousands of Mahlab Balochs who await their fathers and brothers, but they have been threatened to become silent. For them the stable struggle of Mahlab is a good source of encouragement to amplify the voice of affected families and that of Voice for Baloch Missing Persons. Most of the families, whether are scared or waiting for a miracle to happen, are still looking an extraordinary move.