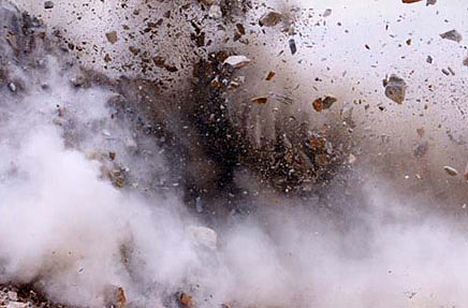 Quetta: Three children and four women of same family have been seriously wounded in the blast in Bugti’s refugee camp in Afghanistan on Thursday. The Media cell of Baloch Republican Party (BRP) reported the attack.

According to details a car loaded with explosives went off with huge blast in front of the house of Gul Bahar Bugti in refugee camp in Balochistan bordering area in spin Boldak region of Afghanistan. Three children and four women of same family have been seriously wounded in the blast.

“The suspected driver parked his car a few meter away from the camp and detonated it with remote controlled device. Many houses of Baloch refugees collapsed and three children and four women of same family have been wounded.” Said Gul Bahar Bugti.

He further said, at least three children and four women who were standing near camp have been wounded and a house was completely destroyed in the blast. He alleged “It must be the act of Pakistani intelligence agencies who targeted our camps several times in past”.

It’s worth to mention here that this is the fifth attack made on Bugti refugees in spin Boldak region in Afghanistan. Three attacks targeted the house of Gul Bahar Bugti where he lost his Son, Dur Khan Bugti; grandson, Nehal Khan Bugti; nephew, Zar Khan Bugti and a granddaughter.

One attack was made on BRP exiled leader Riaz Gul Bugti’s house on 12th July 2013 in the same region. Two gunmen were riding on motorbike  hurled hand grenade inside the house of Baloch Republican Party exiled Leader Raiz Gul Bugti which resulted in wounding his aged mother and ten years old daughter.

Baloch Republican Party spokesman Mr Sher Mohammad Bugti condemned the attack on Bugti refugees camp and called upon the international community, human rights groups and world refugee organizations to act and stop massacre of Baloch refugees and he urged United Nation to insure the safety of the Baloch refugees in Afghanistan.

Published in the Balochistan Point on March 7, 2014