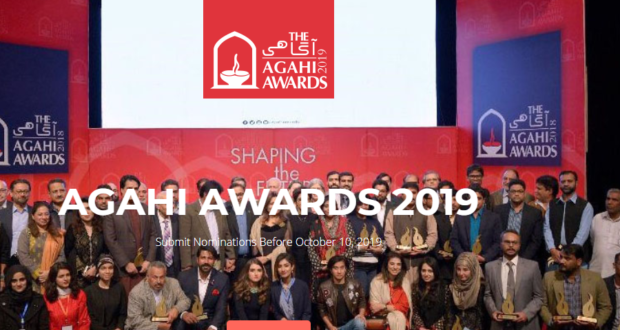 AGAHI Award winners to be announced on the International Day for Elimination of Violence Against Women.

ISMLAMABAD: The AGAHl Awards 2019 ceremony will be held on 25th November, to mark the elimination of violence against women day. The Awards will be recognizing the efforts of journalists and the media community under the theme of eliminating violence against women and encouraging a pluralistic society enabled by justice and communal rule of law.

Elimination of violence against women is not passive or silent acceptance of differences; it is a value of respect for fundamental human rights. It is a constant commitment to facilitating exchanges and dialogue, despite difficulties and a lack of cultural understanding which can lead to inward-looking attitudes. It is a call to question prejudice and commonly-held beliefs of violence perpetuated against women in different societal and cultural societies

The AGAHI Awards this year will be honoring journalists while commemorating the theme of resilient women who are fighting to eliminate violence against other women with an aim to encourage data-driven news reporting and investigative journalism in Pakistan. The AGAHI Awards are intended to celebrate investigations and data-driven stories, articles, audio visuals stories in regional languages produced and published by Pakistani journalists and news organisations that showed truth to power, enhanced government accountability, and promoted the public interest and empowered social and communal highlights in the media every year.

The AGAHI Awards is to recognize and appreciate the best journalistic practices in Pakistan, creating a healthy competition within the media, encouraging ethical and professional reporting practices.

AGAHI and Mishal in collaboration with multiple stakeholders have jointly created a jury consisting of national and international leading opinion-makers, development experts, media gurus and knowledge professionals. The jury panel will be evaluating the entries from more than 3000 entries this year.

“Tolerance for journalists and among journalists should be ensured for both their professional wellbeing,” said Amna Sabahat, the Executive Lead for AGAHI Awards. “Journalism is a mirror for the society to reflect on its values and to ensure its prosperity. AGAHI Awards has been the benchmark to measure journalistic professional excellence for the last 9 years.”

AGAHI Awards recognizes the content across various media platforms; be it print, broadcast or digital, promoting socio-cultural values, prosperity and dignity for all. In a world of rapidly changing dynamics especially in the media industry, AGAHI Awards prides itself on recognizing the best journalism practices. Many of the AGAHI Awards winners’ are now in decision-making and leadership positions across the industry for “Shaping the Future of Journalism”, and furthering the cause of Dignity for All.

Ethical and quality journalism plays a crucial role in enhancing the collective consciousness of a society that builds a nation’s identity and purpose by promoting free, responsible and democratic utilization of the media. The AGAHI Awards acknowledges journalists’ professional commitment to safeguarding public interest. The objective of AGAHI Awards is to recognize and appreciate the best journalistic practices in Pakistan, creating a healthy competition within the community, encouraging ethical and professional reporting.

Inaugurated on March 28th, 2012, the AGAHI Awards are Pakistan’s first ever journalism awards recognizing the best journalists in more than 30 different journalism thematic areas. Through this initiative, AGAHI and Mishal Pakistan, in collaboration with leading press clubs across the country, local and international media development bodies, academia, regulatory authorities and the private sector, have been playing an instrumental role in promoting content diversity.

The AGAHI Awards are the most sought-after journalism recognition in Pakistan. The Awards have been the foremost development initiative for journalist community in the country. The awards have identified some of the most talented and diligent journalists in the industry.