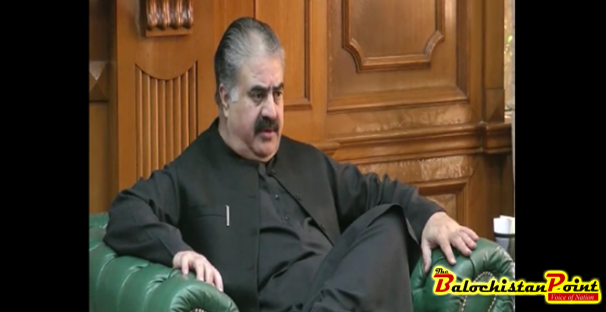 All countries should play their vital role for elimination of terrorism from this region: CM Balochistan

QUETTA: Chief Minister Balochistan, Nawab Sanaullah Khan Zehri Thursday said that all countries should play their vital role for elimination of terrorism from this region. “Pakistan is a peaceful country and wants better ties with all countries particularly with its neighbours,” he added.

Talking to a group of Iranian journalists who called on him at Chief Minister’s secretariat, he said that Pakistan is playing an important role in eradication of terrorism and had given a lot of sacrifices in war against terror. “We are the victims of terrorism and strongly denounce terrorism,” he said, adding that all countries should play their role against eliminating ISIS and other terrorists operating from Afghanistan and destabilizing Pakistan.

Nawab Zehri said that Balochistan and Iran enjoyed old brotherly and culturally relations and both countries always helped each other in the hour of need.

Responding to a question, he said that we strongly condemn terrorism as Pakistan itself is a victim of terrorism, adding that the sacrifices of Pakistan in elimination of terrorism should be lauded. “Last year terrorists attacked on our lawyer community in which over 60 senior lawyers were martyred as terrorists have no religion,” CM added.

He said that there is no difference between Shia and Sunni sects in Pakistan as they both live with peace and harmony because we are all Pakistanis. “Following 9/11 incident our country had to face problems either, however, since 2013 entire country including that of Balochistan is heading towards peace, development and prosperity,” he added.

To a query, Chief Minister strongly dispelled the impression that Gwadar Port is being given security by China and said that Pakistan is a sovereign country as well as first Islamic atomic power. “Pakistan has established special security division to protect Gwadar Port and other projects of China Pakistan Economic Projects (CPEC),” he added.
He said that Pakistan and Iran are on the same page against terrorism, adding that Balochistan government is providing extra- ordinary security to Shia people, and Shia pilgrims heading towards Iran. “Over 90 percent peace has been established in Balochistan and no attack had occurred on Shia processions since 2013,” he added.

Referring to tourism, Chief Minister said that Balochistan is the largest province of Pakistan in terms of landwise and it has great potential in tourism as world’s second largest Juniper forests are located in Harboi Kalat and Ziarat districts.

Responding to a question, Chief Minister said that women are enjoying equal role in Pakistan and they are playing their essential role in all fields. “Speaker of Balochistan Assembly is a woman which is an important slot while recently we inducted a woman in provincial cabinet,” he said. Government had also increased the budget of Education, Health and building dams to tackle the shortage of water in Balochistan, Zehri said.

To another query, Chief Minister said that Pakistan and Iran had shown interest to connect Chabahar Port City of Iran to Gwadar Port city via railway track and road. “An initial agreement has been signed with Governor Sestan Balochistan last year and work on this project would be started soon.

Published in The Balochistan Point on September 22, 2017