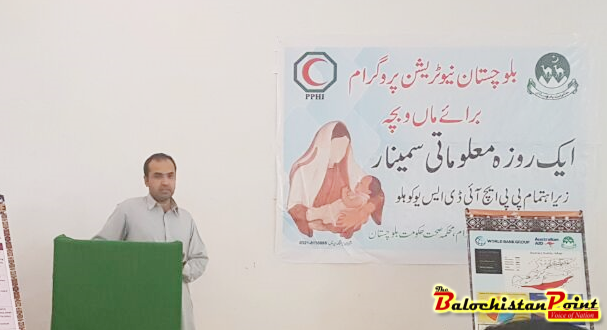 Then M&E Officer PPHI DSU Kohlu Rafiq Buzdar shared that PPHI was started working in the district in 2007. “From that period to till date PPHI had repaired more than 20 Health Facilities and also provided furniture, medical equipments, and sufficient quantity of medicines to all BHUs and also made punctual the habitual absentee staff and now all BHUs are functional and PHC services are being delivered to the poor masses of BHUs catchments areas at their door steps.” Rafiq Buzdar added.

PPHI official informed that Lab Items including Microscope were also provided to 14 BHUs. “While starting of Nutrition Program in July 2017 in kohlu PPHI established 18 OTP centers at their focused BHUs and 1 at DHQ Hospital Kohlu with technical and financial support of Balochistan Nutrition Program for Mothers and Children for the Treatment of Malnourished children from 6-59 months and Pregnant & Lactating Women as well,” he added.

He further said: “As per NNS 2011 the SAM cases ratio should be maximum 6% of total under 5 years children of a population however when community based screening of 6-59 months children was conducted by PPHI at Kohlu the ratio of SAM cases was 12% and when the screening was conducted at OTP level the ratio of SAM cases was up to 22% and this situation was very alarming for all therefore situation was reported to BNPMC for further export investigation and way forward to deal the situation.”

Later on Samiullah Zarkoon District Nutrition Officer gave a detailed presentation about Nutrition program implementation from July 2016 to September 2017, he shared that all staff members of OTPs had been trained thrice on CMAM, use of RUTF & Multi micro nutrients and other stuff provided by BNPMC. “Total 6375 children of 6-59 months were screened at BHUs catchments areas out of which 1425 children were facing severely acute malnutrition and 1221 were facing moderately acute malnutrition and remaining 3728 were normal.” Zarkoon added.

He further said that out of 1425 SAM children 541 children were fully cured and discharged from OTPs and 407 children are still admitted in program, Moreover 1095 children are getting Multi Micro nutrients.

Focal person Nutrition program PPHI DSU Kohlu gave a detailed briefing about the importance of breastfeeding; he emphasized on exclusive breast feeding till to 6month age of child.

Chief Guest of the event, Mir Baz Muhammad Marri addressing to the participants said that the forum was very knowledgeable and he further said that PPHI had fully functionalized all BHUs with a satisfactory performance in the district. “Nutrition program which is very much need of district Kohlu may be upgraded and community is very thankful to Government of Balochistan for starting such great program.” He added.

Published in The Balochistan Point on October 10, 2017

2017-10-10
admin
Previous: There Was a Man Who Wasn’t Mad
Next: The Dilemma and Disparities of Democracy