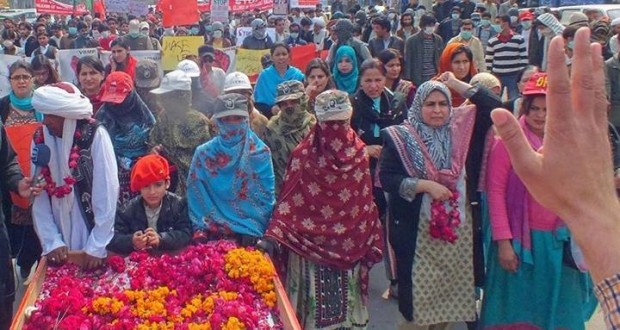 In the timeline of our world, Long March has happened before also; Mao Zedong undertook it, even Gandhi did a Dandi March against British rule. However both Mao and Gandhi were fortunate to get massive public support from thousands till the end. But it would be unfair if the world doesn’t recognize the Long March launched by Mama Qadeer Baloch and his supporters.

For over three years (1311 days) Voice for Baloch Missing Persons Vice-Chairman Abdul Qadeer Baloch staged protest and hunger strikes at the Quetta Press Club.  During which time he faced frequent threats  to end his camp.  In August of 2013 the VBMP Protest Camp was ransacked and set ablaze by unidentified miscreants.  Undeterred, Mama Qadeer continued his protest in Quetta until October of 2013.  The 72 year old Abdul Qadeer Baloch started his Long March from Quetta to Karachi.  After a grueling 27 day journey through the rugged Balochistan terrain, they reached Karachi. While covering this distance of 750 km, he and the long march participants received frequent threatening phone calls.  Then while in Lasbela District, miscreants in an unidentified car attacked them. However, they were lucky that no one was seriously injured.

After reaching Karachi, participants of the Voice for Baloch Missing Persons Long March held an assembly and public seminars to create awareness of the State’s campaign of enforced disappearances and extrajudicial killings in Balochistan.  During the seminar, Mama Qadeer announced the long march from Quetta to Karachi would continue on to the UN Office in Islamabad.  On December 13th, Mama Qadeer Baloch along with Banuk Farzana Majeed Baloch, Banuk Sami Baloch, Banuk Sabah and 11 years old Ali Haider Baloch and a few others resumed their Long March. They would travel another 1400km, by foot, to reach their destination of Islamabad.

The 72 year old Mama Qadeer Baloch guided his faithful companions on their journey to Islamabad for the safe recovery of the 18,000 disappeared Baloch. The world will forever revere Mama Qadeer Baloch and long march protestors for their 2800km journey to create awareness of the State endorsed campaign of enforced abductions and extrajudicial killings in Balochistan.

After an additional 36 days, the Long March protestors walked through Sindh and into Punjab.  Along the way Mama Qadeer Baloch was welcomed and embraced by the citizens of each town they passed.  Despite the warm hospitality of their hosts, Mama Qadeer  and  his colleagues continued to receive threatening calls.  The Long Marchers were determined to reach Islamabad.  They marched bravely through the dense urban cities of Punjab.  While passing through Okara City, Punjab, an unidentified truck attacked the Long March protestors.  Although there were no casualties, two of the Long March Participants are injured by the vehicular attack.  Undaunted by threats, Mama Qadeer Baloch and the Long March Protestors marched forward to Islamabad.

As the long march approaches their destination a desperate government has imposed Sec 144 Prohibitory orders, banning public gatherings and protest in Islamabad. Mama Qadeer Baloch and his supporters participating in the Long March could not be deterred by the government nor violent miscreants.

Covering such a long distance on foot to finally reach Islamabad, walking for 106 days from Quetta to Karachi and then Karachi to Islamabad has been achieved despite facing numerous obstacles and hardships.  Mama Qadeer Baloch and the Voice for Baloch Missing Persons long march protestors overcame all odds and made history.  Their Steadfast courage and fortitude reinforced by the suffering when their beloved relatives & friends got snatched away from them.

Surely, the march was not short and far from easy. I am a young generation but truly I could not travel such a long journey. I surely appreciate Mama Qadeer, Banok Farzana Majeed, Banok Sammi Baloch, Banok Saba Baloch and 11 year old child Ali Haider Baloch.

Despite the government’s best efforts to deter  and  frighten the long marchers, they walked on with resolve and determination.  Even a large sum of money was refused by the Mama Qadeer Baloch, in an effort to persuade him to abandon his noble cause.  The entire Baloch Nation appreciates Mama Qadeer Baloch who showed courage in the face of oppression and integrity in the face of temptation.

Published in The Balochistan Point of March 1, 2014

2014-03-01
admin
Previous: How Mama Qadeer made a history?
Next: Pity the Nation That Does Not Respond to the Misery of Fellow Countrymen