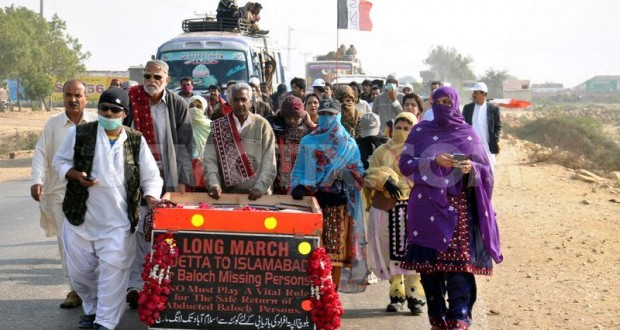 Long marches are not a new phenomenon. Many leaders, from all over the world, have embarked on long marches primarily for political motives. The most prime example is of Mao Tse-tung who along with soldiers and party cadres covered a distance of more than 9000 kilometers. Such efforts not only cemented his position as the leader but, also paved the way for communist regime in China. Another example is of Gandhi who famously walked for 390 km on foot as part of his Salt March.

Furthermore, in our country many leaders have organized long marches to achieve their objectives. During the last few years, two significant long marches took place. One was for judiciary’s restoration and the other was for the reformation of the governance system. Former was successful while the latter was a failure but, notably, Pakistani media covered them vehemently. It seems quite difficult to comprehend the main reasons which attract maximum media coverage. Is it the SUV(s) and motorcade(s) which they are eager to show on their channels? Is it the number of participants? Is it the display of wealth and power? Or, is it the self-serving policies of various media houses? It is more of a conundrum for me but let me attempt to make sense of it.

In my personal opinion, glittering wealth and deceitful power are necessary elements to get media attraction because presently a handful of people (including women and children) from Balochistan led by Mama Qadeer Baloch, a 72 year old man, are on their way to Islamabad to seek justice for missing persons but media rarely reports about them. The headlines hungry media which has reported on Veena Malik’s piety, Meera’s silliness and things such as falling of a boy in a manhole as breaking news, has turned a blind eye to the cause of Baloch people. Perhaps because they are covering thousands of miles – from Quetta to Islamabad – on foot instead of SUVs and they do not have wealth and power to display lavishly. They are on foot, nonviolent, poor and an epitome of misery. Surely, they do not have any attractive element to draw some limelight on themselves.

The headlines hungry media which has reported on Veena Malik’s piety, Meera’s silliness and things such as falling of a boy in a manhole as breaking news, has turned a blind eye to the cause of Baloch people.

All blame cannot be put on the media because there is another entity which is the most powerful and responsible i.e. the state. In international relations, state can be defined as: a legal/political entity that is comprised of the following: a) a permanent population; b) a defined territory; c) a government; and d) the capacity to enter into relations with other states. Fortunately, our motherland perfectly meets with each criterion which is needed to be recognized as a sovereign state. Since, it is imperative for a state to establish its authority and exercise the rule of law in order to govern; it becomes obligatory to deal with sedition against the governing bodies.

Likewise the state has conducted many military operations against the perceived threat of Baloch separatists. Military operations may result in a short term dissuasion of critical situations but in the long run it leads to further problems. The issue of separatism must be positively addressed by giving equal rights, provincial autonomy and by developing the affected people and areas.

Earlier, US Congressman Dana Rohrabacher had tabled a resolution in the US House of Representatives for the recognition of Baloch right to self-determination. It should be noted that the global human rights regime has now become very powerful, and in many ways has also transcended state’s authority. Therefore, human rights violation is a major excuse for intervention by another state on humanitarian grounds.

It is high time that government should dispense justice and fulfill the rightful demands of Baloch people under the constitution of Pakistan. If the government can enter into talks with barbaric TTP, who not only murdered thousands of people but have also defamed our country as well as our religion, then why cannot it negotiate with the Baloch people?

The daunting reality of our nation becoming unscrupulous and indifferent towards the miseries of others is appalling and pressing. What makes the aforementioned examples of Mao and Gandhi prodigious is the overwhelming support they both received from public. That is why Gandhi’s Salt March is still remembered and often talked about event from the past despite the fact that he had only covered 390 km, while Mama Qadeer with his group has travelled more than 2,000 km until now. Shamefully people are not paying any heed to these activists, except few who show up to express solidarity. Some politicians also show up for photographing and then fade away just like their empty promises. I am afraid that the names of these courageous and undeterred Baloch activists would soon be forgotten. Lastly, pity the nation that does not respond to the misery of fellow countrymen.  ( Courtesy : The Laaltain   http://www.laaltain.com  )

The writer is a researcher at The Pakistan Institute of International Affairs and tweets at @belallashari.